I run Macrium Reflect backup on my production desktop every morning at 9 AM. Hearing the big Toshiba 8TB drive chunking away reminds me it’s got things covered. I should’ve turned to that backup image immediately after a driver install yesterday. A new Realtek Universal Audio Driver (UAD) was expected out of that update. But I wound up with a Realtek HD Audio driver instead. Because I decided to try a restore point made just before that driver install, I bought trouble as well. And that’s why I say: Restore Point failure forces strategy change. Let me explain…

Silly me. I should know better. I rely on Macrium to provide a failsafe against glitches. This includes self-inflicted wounds, like ignoring Device Manager’s warning that it couldn’t find a replacement UAD driver in the version v6.0.9045.1 pointer I picked up yesterday. Though it came from my own TenForums Realtek UAD thread, and a usually impeccable source, it didn’t work the way it should have.

Having been down the road of attempting a UAD update and winding up with an HD Audio drivers instead, I already knew the easiest way out of this spot was to roll back and start over. My mistake — which I will never repeat again — was to use a questionable but more recent Restore Point, rather than a known, good working Macrium backup image (an .mrimg file). When it failed, I found myself turning to that .mrimg file anyway.

When Failure Takes Longer Than Success…

The truly galling part of this misadventure is that it took 40 minutes for the Restore Point to fail and return control of the PC into my hands. It took just over 10 minutes to restore Macrium’s image backup file and for me to get restarted on the failed Realtek driver update (not to mention the Windows Update items for Patch Tuesday as well).

Ultimately, I did find a v6.0.9079.1 UAD driver at Station Drivers that did work as expected later. It was the easy part of the post Restore Point cleanup efforts, some of which are still underway. Ironically my big, honkin’ 8TB backup drive and the little 500GB SSD parked next to it in myWavlink dual SATA drive caddy both got hosed in the Restore Point’s wake. I’m using the Data Recovery feature in MiniTool Partition Wizard v12.3 to recover the 8TB drive’s contents now. This task has already taken 14 hrs and is 22% complete. When it’s done, the 500GB drive recovery should go MUCH faster.

When the cleanup is done, I’ll be turning off restore point capture on my C: drive. I’ll also purge all the storage space that restore points currently consume (1.7 GB according to the WizTree graphic at  the head of this story). I figure if I don’t have any more restore points around to “try it and see what happens” with, I’ll be unable to repeat this recent debacle.

For the record, the item that caused the restore operation to fail was a Dropbox file. It’s ironic that something deliberately mirrored between cloud and desktop could cause such an operation to crash. Another copy is still in the cloud, safe and ready to mirror back locally when needed. Sigh. 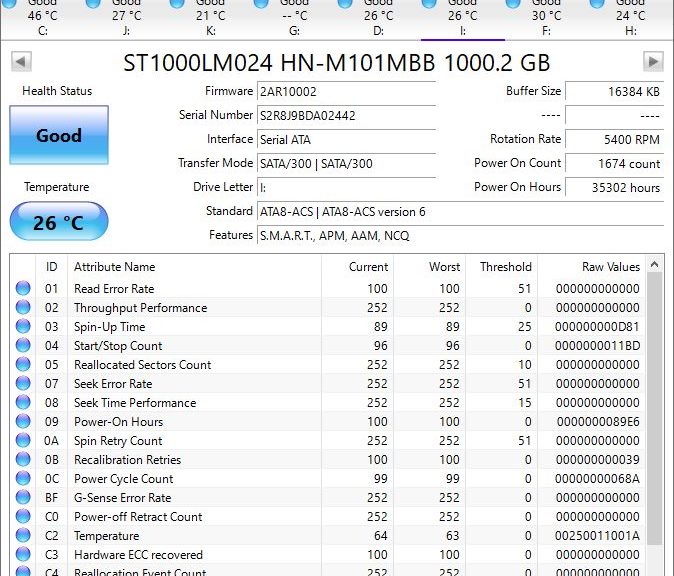 I’m a long-time member and supporter at TenForums.com (joined November 14 2014). Just recently I saw a thread where a member reported issues with an apparently failing hard disk drive (HDD). Immediately, he and other responders started chewing on how to diagnose and possibly fix the HDD. “NO!” I remember thinking as I started reading the back-n-forth. “Failing drives need copy first and foremost,” I went on, “so progressive failures won’t cause more data loss.”

Why Do Failing Drives Need Copy First and Foremost?

If an HDD is starting to fail, there’s usually a cascade involved. First, one or two small failures, followed by increasing frequency and severity of failures. After that: complete drive failure. Once you have a clue that a drive is starting to fail — and SMART monitors like HD Sentinel or CrystalDiskInfo will clue you in quickly — the next step in troubleshooting is: Make a snapshot!

When trouble rears its head, the temptation to start diagnosing and attempting fixes can be nearly overwhelming. But in this particular case — a possibly failing HDD — such diagnosis and fix activities can severely exercise the disk. If it is failing, that could either make existing data losses worse, or cause data losses that haven’t yet occurred.

How to Get That Snapshot

I’d try a disk image using something like Macrium Reflect Free. If the disk is seriously corrupted, however, it might not work. In that case, use File Explorer or copy commands at the command line/in PowerShell to copy anything and everything you can see.

On the other hand, if you have a reasonably current backup of the failing drive — and you should — you can copy only items dated since the backup was made. Once you’ve captured what you can, you won’t experience further data loss as you pursue various troubleshooting strategies. Now that you’ve done due diligence for data protection, go for it!

When in Doubt, Replace the Disk

In my experience over 36 years of working with personal computers, I’ve had half-a-dozen hard disks fail on me. (I bought my first PC in 1984: a Macintosh 512K, aka “Fat Mac.”) As disks start to fail, they become increasingly unreliable and problematic. I’ve always replaced them as soon as diagnosis pointed out unquestionable failure signs or symptoms. I learned the hard way to backup, too: I lost the better part of a book manuscript in the late 80s when an external (and expensive!) 300MB SCSI hard disk experienced a head crash. Please: learn from my bad experiences. Don’t wait to have your own. Take my word for it: you won’t like them, not one little bit.