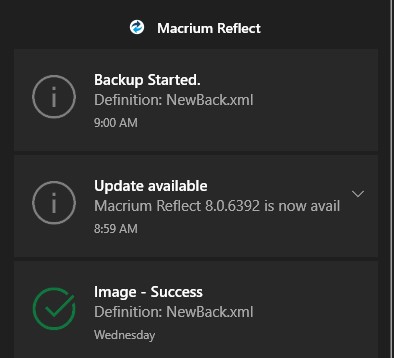 OK, then: it’s finally making its way into the general Windows user population. I’m a zealous advocate of Paramount Software UK Ltd’s excellent Macrium Reflect Free backup/restore tool. Over the past 10 days or so, the company has now up-versioned that Free version from 7 to 8. This week, Macrium 8 Free makes normal upgrade appearance, via the tool’s built-in update facility. In fact, the lead-in graphic for this story shows a Notification that an 8-version update is available.

A Macrium Reflect 8 Free download has been available for some time now through Softonic. It also showed up on the Macrium site a couple of weeks ago. But this development is nicer, because it means Reflect 7 users get an upgrade to Version 8 without requiring them to find, download and install the new version manually. Now, it’s simply part of the program’s own routine upgrade behavior.

For most users, the Free version is all they’ll ever need for home or small office use. Note: the commercial Free license limits the number of instances to 10 per location. Version 8 builds native Windows 11 rescue media, even though Win10 equivalents still work. I particularly like the program’s boot repair facility, its VSS repair and recovery, and its ability to boot backups as Hyper-V VMs.

Personally, when something as good and reliable as Macrium Reflect comes along, I believe in supporting its maker with an outright purchase. I have a 4-pack Reflect 8 Workstation license, and I run Reflect Free on the other 7 machines currently resident here at Chez Tittel. All are test/experimental machines I use for research and writing about Windows stuff.

I strongly recommend Macrium Reflect, in either free for for-a-fee versions. It’s the only backup tool I’ve ever used — and I’ve used many of them over the years — that’s never failed to restore and repair my Windows PC when they encounter difficulties. I blush to confess that many of those issues are self-inflicted, but this tool gives me the courage to try crazy stuff with Windows, knowing that I can fix it if it breaks on me. 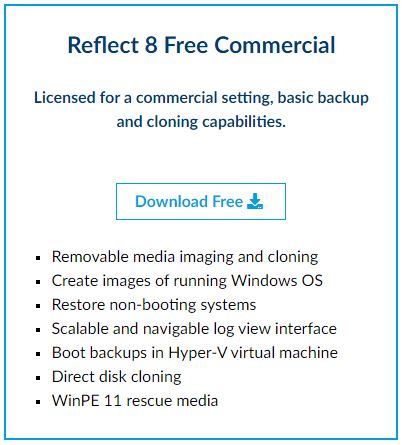 I’ll confess cheerfully and unreservedly, I was converted to MR through my association with TenForums. I’ve been using MR about as long as I’ve been a member there. And indeed, I concur with prevailing opinions there (and at its sister site ElevenForum.com) that MR Free is sufficient to meet the backup needs of most ordinary users.

Because I believe in supporting makers who do good work, I own a 4-pack license for the commercial version of MR8 released earlier this year. But now, I can — and will — upgrade all of my other test and experiment machines to the free version directly from the source.

The program has been reworked and revamped, especially in light of Windows 11. It supports use of WinPE 11 rescue media, and works well with the new OS. It supports removable media imaging and cloning, and uses VSS to support imaging of running Windows 10 and 11 instances. It’s got great backup exploration tools, and can mount its backups as VMs via Hyper-V.

In all seven years I’ve been using MR, it’s never failed me when it comes to restoring a backup or repairing damaged Windows boot facilities. MR7 was a great tool. MR8 is even better. If you’re not already using it, grab a copy of MR8 today. If you’re using MR7, it’s time to upgrate to MR8 (even on Windows 10 PCs). Cheers.