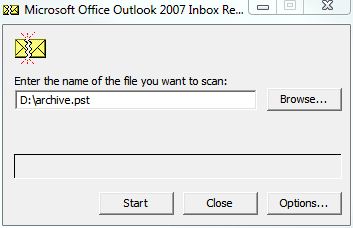 OK, I admit it. I’m a little bit obsessive about maintaining maximum free space on the 80 GB putative (74.5 GB actual size) Intel X25-M SSD I use as the system drive for my production PC. In my never-ending quest to keep things pared down to the absolute minimum, I will occasionally resort to cleaning up and compressing the PST files associated with Outlook on that machine. To that end, I’ve already moved my Archive.pst file to another drive. But today, I got into compacting my PST files (and completely cleared out the default Archive.pst that Outlook manages to create on my C: system drive, whether I want it to or not), and learned some interesting stuff along the way.

END_OF_DOCUMENT_TOKEN_TO_BE_REPLACED

Anybody who follows my system blog knows that my current production system is probably best described as temperamental. Since upgrading to Windows 7 in August of 2009, it’s been a heckofalot better than its previous life under Vista, to be sure, but I’ve had my share of ups and downs with this collection of hardware parts. Here’s a brief description of what’s going on under the hood in this particular box:

Over the past couple of years, I’ve had to deal with numerous instances of blue screens, application hangs, and strange Windows Explorer hangs. I’m also doing increasing work with virtual machines and have found that 4 GB of RAM just isn’t enough to permit me to be productive running regular apps with even one VM open. So I’ve been preparing to upgrade this system to x64 Windows 7 from the current 32-bit x86 version, as documented in my August 2, 2011 blog “Coming Soon (I Hope): Win7 32- to 64-bit Conversion.”

Here’s my problem, depicted in the form of the current Reliability Monitor for the past 20 days: this system has been completely trouble-free pretty much since I wrote the afore-cited blog. Not a single glitch, hitch, blip or hiccup in the interim.

Reliability monitor for August 6 thru August 24
(Click to enlarge)

Frankly, this puts me in a quandry: yeah, sure I do need the extra memory space that converting from 32- to 64-bit Windows 7 will confer thanks to the 8 GB of additional RAM I’ll install into the system to take it up to 12 GB. But I’m slammed with work right now, and it goes against my better instincts to start making major changes to my principal production system right now. I have a 12 GB i7-930 system up and  running already anyway, with a GTX 470 graphics card and an even faster Corsair Vertex 2 SSD for the system drive. I’m starting to think that maybe I should migrate to that system instead, and convert this box to test machine status when I upgrade to x64 Windows 7 and add the extra memory. But one thing’s for certain: I’m not doing anything major until the current onslaught of work tapers off a bit. I just don’t have time to make any production changes right now!

If you read my last blog post “Booted Off Twitter! No Due Process, Either…” you’ll get a chance to review my recent tale of woe that recounts how, upon having my @EdTittel twitter account suspended, I initially begged and pleaded to have that suspension reversed, to no avail. This morning, while I was chatting on the phone with social media maven Allen Mireles (@allenmireles), when we reviewed the situation once again, she volunteered to contact the leader of the Twitter Safety & Trust team, Del Harvey (@delbius) to see if she could look into matters and consider some kind of possible account restoration maneuver.

END_OF_DOCUMENT_TOKEN_TO_BE_REPLACED

I tried to login to Twitter on Saturday only to be informed that my account had been suspended by Twitter itself. Once the panic subsided, I decided to dig in and try to find out what had happened, and to try to get my account reinstated. What ensued over the next three days can only be described as Kafka-esque (just call me “Josef K”) and was not without a few moments of grim theater, accompanied by some abject groveling from yours truly.

END_OF_DOCUMENT_TOKEN_TO_BE_REPLACED

I took delivery of my snappy new and way cool Dell Alienware M11x R3 laptop last Thursday, August 4, but it wasn’t until this afternoon (August 9) that I finished a key step in making best use of this machine. I finally got my WiMAX account turned on with wireless service provider Clear. Although the instructions aren’t terribly clear in the emails and Web site information about turning on and using my WiMAX interface, all I had to do was hear these words from the very nice tech support guy who called me and said “Do a new account sign-up with Clear” to know exactly what to do.

END_OF_DOCUMENT_TOKEN_TO_BE_REPLACED

I’m in the process of revising my college textbook Guide to TCP/IP for Course Technology/Cengage Learning right now, going from a third edition published in 2006 to a fourth edition that will bear a copyright date of 2012 by the time it rolls off the presses early next summer. This time, there will be lots of changes for this new edition: we’re switching protocol analyzers from Ethereal to Wireshark, I’m bringing in a new lead writer (Jeffrey L. Carrell, a former Novell colleague and long-time IP networking expert and trainer), and — most important of all — we’re completely rebuilding the work to add in-depth coverage of IPv6 across the board, along with beaucoups of information on how to migrate from IPv4 to IPv6 and how to make IPv4 and IPv6 coexist happily.

END_OF_DOCUMENT_TOKEN_TO_BE_REPLACED

It’s often said that everything in the IT industry comes and goes in cycles. I have to agree with this notion: after working in the industry for over 30 years now, I’ve seen several waves of client/server, thin client/fat client, remote, and distributed technologies and APIs come and go (remember “diskless workstations?” “set-top boxes?” “videotex?”).

The same ebb and flow also applies to IT certification, which I got involved with initially as a temporary member of the training department at Excelan back in 1988, and then again almost ten years later in 1996 as the Windows NT 4.0 wave crested and ran. In the heady days from 1997 to 2000, it seemed like certification was an unbeatable and guaranteed ticket to IT success. But I was also there when the bottom fell out after 9/11 and have watched that same wave pull back further and further until IT certification seemed no more important or relevant to finding work than any other checkbox sorts of attributes (degree, experience, and technical expertise).

In the last year, however, I’ve noticed that the wave seems to have hit its trough, and is now starting to come back in. What makes me say this? Several things:

END_OF_DOCUMENT_TOKEN_TO_BE_REPLACED

I finally got the additional 8 GB of DDR2-800 RAM I ordered for my primary production system —a QX9650-based Quad Core system built around a Gigabyte  X38-DQ6 mobo with an Intel X25M 80GB SSD and nVidia 275 GTX graphics card. That means that I’m going to snapshot the current 32-bit version of that system into a VM, make an image and standard backup, then blow everything away and finally rebuild that system around 64-bit Windows 7 Ultimate, to replace an aging and sometimes wonky 32-bit version of the same OS on that system. This build goes all the way back to the initial release of the production version of Windows 7 to MSDN on August 6, 2009. I’ve patched and updated this puppy to keep up with Windows Update ever since and it’s gotten to the point where, as so often happens with heavily used and abused Windows installations, things get flaky from time to time. What does this mean? Today’s System Reliability graph tells the story pretty well:

END_OF_DOCUMENT_TOKEN_TO_BE_REPLACED

Ed Tittel has worked over 30 years in the computing industry. He’s worked as a software developer and development manager, a networking consultant, a trainer and course developer, and a technical evangelist for companies that include Burroughs, Schlumberger, Excelan, Novell, IBM/Tivoli and NetQOS (now part of CA). He also ran a content factory named LANWrights from 1994-2004 that routinely produced 50-plus computer trade books yearly, or thereabouts.

By 1994 Ed had worked on a dozen books (including the immortal classic Stupid PC Tricks) and written over one hundred articles, so he took the plunge when Novell closed its Austin, TX, offices and went out on his own. Over the next 10 years he would contribute to 100-plus books, start his own company, create the Exam Cram series of IT Certification books, and dig deeply into content development and delivery for a variety of publishers and corporate customers. Ed has published books with Academic Press, Addison-Wesley, Charles River Press, Course Technology, IDG Books, Pearson Publishing, Sybex, and Wiley. He has also written for the following major corporations: Ciena, Cisco, Fortinet, HP, Microsoft, Novell, Platform Computing, and Symantec, among others.

Ed’s areas of technical interest include: markup languages; information security; Windows operating systems; and Web development tools and technologies, especially e-Commerce. Ed currently blogs 4 times weekly: 3 times for Windows Enterprise Desktop, and once a week for GoCertify.com. In addition, Ed also blogs occasionally for this website and for Win10.guru (for which site he acts as Editor-in-Chief). He writes articles regularly for Websites that include Tom’s IT Pro, Win10.guru, SearchWinIT.com, and SearchEnterpriseDesktop.com. Ed works occasionally as an expert witness on Web development technologies and markup languages, too. In January, 2018, Ed’s research and writing activities on Windows 10 earned him recognition as a Windows Insider MVP from Microsoft. Follow Ed on Google Plus or visit any of  his blogs to learn more about his current work and activity.

This weekend, my Webmaster (Rebekkah Hilgraves, the lovely and talented proprietress of SheTech) and I decided to make the switch from the old EdTittel.com Website to the new site you’re looking at right now. Along the way, we made lots of interesting platform changes and design decisions. What you’re looking at right now is a WordPress-based Website, but one that uses a customized design with heavily customized CSS to present just the kind of look and feel that I thought long and hard about, and that Rebekkah’s superior design sense and skills implemented for me as you see here. Rebekkah started with the standard WordPress Graphene theme, then customized appearance and functionality via CSS to give me just the kind of site functions I really wanted. I hope you’ll enjoy the new look and feel, but that you’ll also provide us with feedback if you see anything that needs work, deserves fixing, or requires correction (contact me or Rebekkah with your input, please).