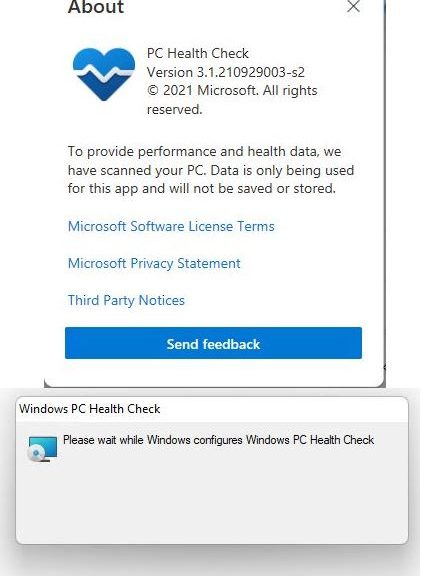 For Windows 10 and 11 users alike, those who try to run PC Health Check (PCHC) may experience an interesting initial impediment. Instead of running whatever version of the tool may already be installed, Windows will install the latest version. Numbered 3.1.210929003-s2, it shows up on all my updated Windows 10 and 11 PCs. Apparently, WU delivers new PC Health Check version as a routine part of the update process.

My best guess is that MS wants to make SURE all Windows PCs have the latest version of PCHC at their disposal. WU itself offers to run the tool as part of its routine update checks now. As you can see in the lead in graphic (at bottom) this means the installer runs to remove the old version, then loads and configures the new one automatically. Only then, can you tell (at top) that the latest PCHC version is running.

It came as something of a surprise to me to invoke PCHC on my PCs, and get the installer first instead. Looks like this is one update that MS does not leave to user discretion. Here it comes, ready (and like it) or not!

PCHC Goes to All Players…

Even on my Surface Pro 3, which WU correctly labels as “unfit for 11” I still get an offer to get PC Health check as shown here:

I’m bemused. There are no “things I can do in the PC Health Check app” that will ever bring Windows 11 to the old Surface Pro 3. Am I wrong to read the language shown above as extending some glimpse of hope that things might turn out otherwise? Nah. It’s just a teaser. Good thing I’m running this system to keep track of Windows 10 as it runs out its tether to the 2025 EOL on purpose, eh?

Just saw a very nice story on this phenomenon from Liam Tung at ZDNet. It’s entitled Windows 10 users get PC Health Check app for diagnostics and troubleshooting. Worth a read it makes some interesting points, and provides a quick way to remove PCHC for those so inclined. That tip reads “Users can uninstall PC Health Check by going to Apps → Apps & Features → App list (Windows PC Health Check) → Uninstall. (I substituted the right arrow entity for Mr. Tung’s less-elegant > (right caret/greater than sign) in this rendition.)