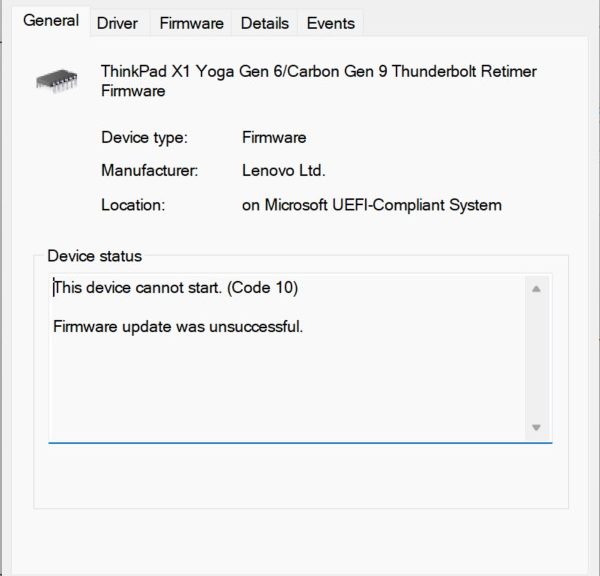 I took delivery of a nifty new laptop here at Chez Tittel late last week. Among the zillions of other things going on around here, I’ve been fooling with this machine since it arrived. This loaner laptop poses weird USB situation, though: I get faster throughput from its USB-A 3.2 Gen1 port than either of its USB4 Type-C/Thunderbolt 4 ports. Throughput is about 10X faster on the USB-A port than on USB-C. That’s not how it’s supposed to work. Go figure!

Once I realized what was going on. I jumped into Device Manager. Sure enough there’s an issue with the ThinkPad Thunderbolt Retimer Firmware. Whaddya bet this could impact USB-C/Thunderbolt 4 timing?

I need some firmware juju. So I’m contacting Lenovo Support to see what they can tell me. I’ll admit I got fooled when Vantage told me the update was installed (and didn’t check DevMgr until later). Now, it looks like I’ll have to roll the machine back to Windows 10 so I can make sure the update gets properly applied. And then, I’ll roll forward again to Windows 11. Just another day in the life, here in Windows-World!

It hasn’t eluded me that checking the firmware install before upgrading to 11 would have been a peachy idea. I’m not one to rush into such things normally. But I wanted to see how the new PC would work with the new OS. I guess I’m  starting to understand there’s at least one good reason why Lenovo didn’t send me the device with Windows 11 already installed.

As I look around the Lenovo site, I see they have Thunderbolt drivers for Windows 11 aplenty. It’s just that they don’t have one for my X1 Carbon Gen 9 laptop just yet. Live and learn, dear readers: that’s why I’m going to try to do.