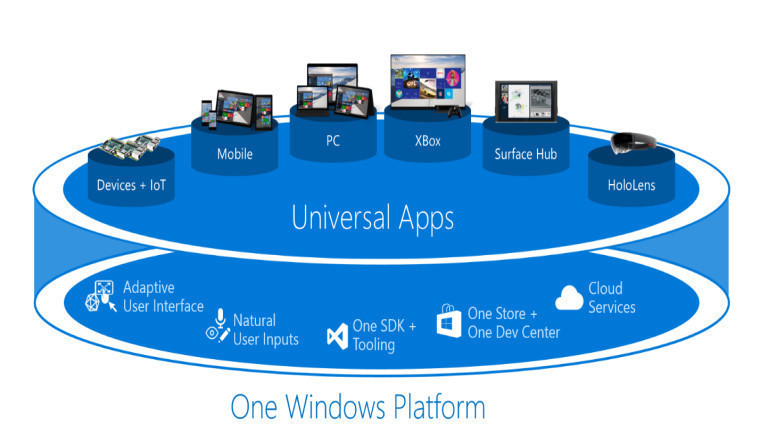 For some odd reason, the old French saying “Le roi est mort, vive le roi!” comes to mind. Announced with great fanfare and stunning promises along with Windows 10 in 2015, the Universal Windows Platform (UWP) is now mostly history. The lead-in graphic shows that UWP was short on neither vision nor ambition (source: MS). But as dramatically as UWP came — now it’s going, as Microsoft recommends developers migrate their UWP code to the Windows App SDK.

From being the key to developing apps that could run on Windows Phone, desktop, or Xbox platforms  — and more (Surface Hub, HoloLens, IoT, etc.) — UWP is falling by the wayside. Long time development guru Rafael Rivera temporarily suspended his Twitter boycott to post about the afore-linked migration advice from MS.

His comment on where UWP is going could be summarized as nowhere, fast. This is what he said:

This signals what I already told you before: UWP will only get “bug, reliability, and security fixes”.

The Windows App SDK is the new king of the development hill. Vive le roi! The Docs item walks developers through the migration process in step-by-step fashion, following these headings:

Out with the Old, In with the New

Curiously, MS doesn’t spend much text on explaining this change or touting the benefits of the new Windows App SDK. It simply makes  matter-of-fact assertion that “The Windows App SDK provides a broad set of Windows APIs — with implementations that are decoupled from the OS, and released to developers via NuGet packages.” Later on it says “With the Windows App SDK you can incorporate the latest runtime, language and platform features into your app.” And that’s about it.

It will be fascinating to observe uptake and reactions from the Windows developer community. Given that occasional API reworking have occurred before in this world, I’m curious to see how this goes over. Stay tuned, and I’ll revisit this as news and events decree.