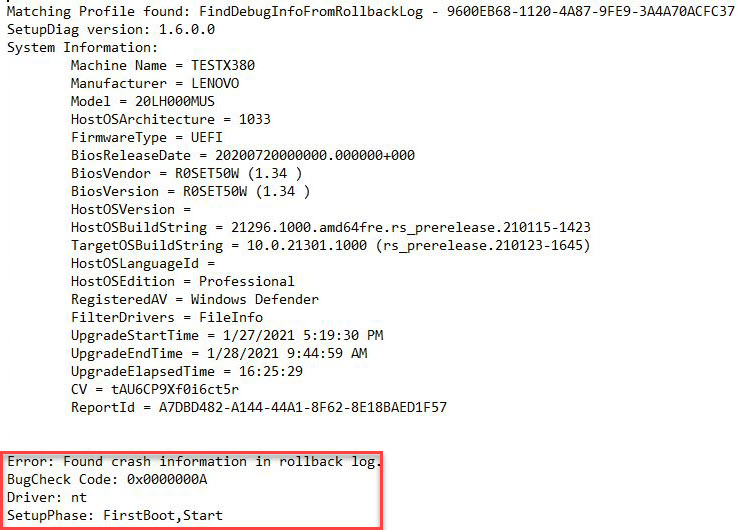 I’ve been struggling since last Thursday to get the latest Fast Ring version — namely, 21301.1000 — installed.  That’s right, I’ve got “interesting” X380 Yoga 21301 installation issues running hot and cold right now. So far I’ve seen at least 4 different error codes, all of which hit at about the 48% mark after the first reboot. I call this the “post-GUI” phase of Windows 10 installation, because it occurs after the WinPE environment takes over the install process following that first reboot.

I’ve just confirmed that these issues persist in the latest CU 21301.1010,  as well as in 21301.1000. I’ve been using the MS tool setupdiag.exe to get to the bottom of things. But because it finds the NT driver as the culprit for the IRQL_NOT_LESS_OR_
EQUAL and the bugcheck 0X0A error, that puts the onus on MS to fix something beyond my control. You can see this in the setupdiag output in the lead-in graphic for this story.

I can tackle and fix lots of Windows 10 drivers. But as I understand it when the NT driver (shows up as lowercase nt in the screencap) is mentioned, it’s general indicator. According to dbgtech.net, “the error might be caused by a device driver, a system service, a virus scanner, or a backup tool that is incompatible with the new version.”

Coming Up Dry Is No Fun at All

I’m running Defender on this PC so I’m pretty sure it’s not involved. I’ve stripped my services down to the bare minimum. Macrium Reflect is my backup too (and still working on the X220 Tablet that has managed both of these recent updates/upgrades). The same device drivers work on 19042.746 on my other nearly-identical X380 Yoga PC (only difference: Toshiba SSD vs. Samsung).

I’m still looking for enlightenment, but not finding any. Last time something like this happened, I just had to wait for a new Fast Ring/Dev Channel release, and it installed just fine. Here’s hoping!

I’d been contacted by a member of the Windows Insiders team as a result of sharing a link to this post on the Windows Insider MVP Yammer community. I was informed that a future Dev Channel release would fix my problem. As I learned earlier this afternoon, 21313 installed without difficulties. Seems that this PC got bit by a known bugcheck error.  It’s the first item on the Fixes list in the 21313 release notes. This has been a known issue for some time, and is apparently now fixed. Woo hoo!