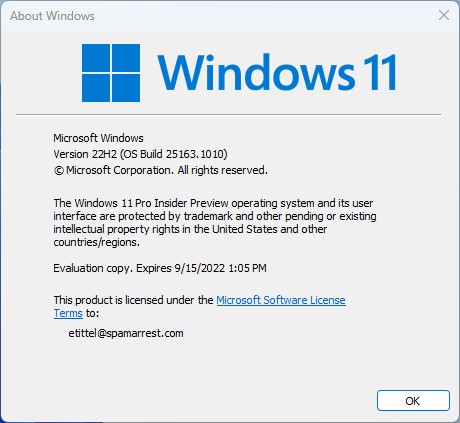 Well, then. I’ve just returned from a week-long absence to visit my son’s chosen college in Boston. Today is my first work day back in the office since July 15. Imagine my surprise and delight when I see that my two Dev Channel test machines upgraded themselves without issue while I was gone. Indeed, that explains my claim that Windows 11 Dev Channel upgrades itself to Build 25163.1010.

If Windows 11 Dev Channel Upgrades Itself, What Then?

Less worry and work for me is always good. And it’s great to observe that Windows 11 can handle itself well. That goes double, when I’m not around to babysit the upgrade process. In fact, my current observations tell me that recent,  ongoing Dev Channel upgrades have been fast, easy and relatively trouble-free.

There’s always a potential jinx when stating claims like the preceding one on the record. I’m prepared to deal with what might be coming my way. I’m still in the habit of making an image backup after each and every upgrade, and regular, periodic backups besides. That way, should I shoot myself in the foot (or Windows 11 do that for me) I’m ready to roll back and recover with minimum effort.

What Update History Has to Say…

I can recall only one or two issues that came along during this period that slowed down or stymied backup. I did have to reset WU on the X12 Hybrid at one point. I also recall having to download and install an ISO on each machine at least once (or perhaps twice) during this time frame.

Overall, though, even though the Dev Channel builds are as close to “the bleeding edge” as MS lets Insider Program members get, it’s been a mostly positive and pleasant experience. Though plenty of people have beefs with Windows 11, I am NOT one of them. I think it’s a good OS. It’s also almost far enough along that enterprises should really start looking at (and planning for) large-scale migrations. When the Windows 11 22H2 Upgrade appears in coming months, that would be an excellent signal to get upgrade/migration testing and pilot programs underway.

It’s long been traditional for Windows users in businesses to wait for “the next upgrade” after a new OS emerges before getting serious about migration. In view of that history, the upcoming release of 22H2 says it’s time to get ready. My experience with all versions of Windows 11 so far argues that migration should be relatively painless. Time will tell!