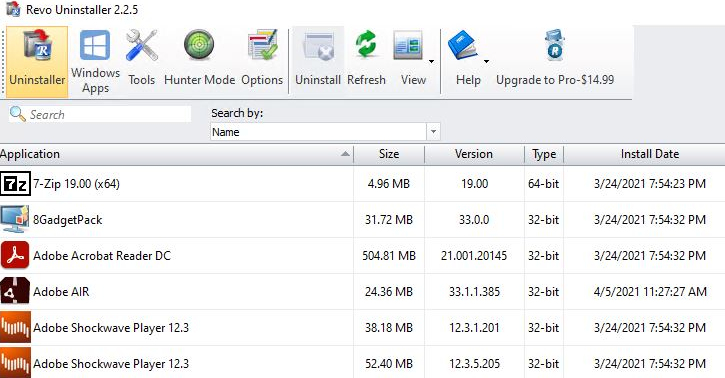 At the end of last year, the Adobe Flash Player hit end of life (EOL). Yet today, when I ran the excellent free Patch My PC Updater on one of my test machines, I noted that Adobe Air was still present, plus Shockwave. too. My thought was; “Time to say so long Adobe add-ons Shockwave & Air!” Upon checking into both, my presumption proved valid. When I checked for Adobe elements on my 2012 Vintage X220 Tablet, I found serveral related elements, all of which I’m removing post-haste (see lead-in graphic).

Both Shockwave and Air are at End-of-Life, at least as far as Adobe is concerned. HARMAN International has taken over Adobe Air support. But I hardly ever use this, so I’ve decided to uninstall on PCs where it’s still present. Not surprisingly it’s absent on all of my PCs acquired in 2018 or later, including 2xLenovo X1 Yoga 380, X1 Yoga 390, and X1 Extreme, among others. The free version of Revo Uninstaller is more than equal to this task. That’s why I used it to generate the lead-in screencap for this story, and to remove Air and Shockwave from machines where they’re still hanging ’round.

For the record, uninstalling Air left 2 registry keys and one value behind, as well as 3 files. Revo happily cleaned those up. Shockwave left 1 key with 13 values and no files behind, and took care of two entries (the one I selected, plus another) on its own.

Read more about the future and status of these Adobe components online. Check out “The future of Adobe AIR” (5/30/2019) and “End of life/…Shockwave Player” (April 9, 2019). Going, going gone, and (hopefully) soon forgotten. Don’t need ’em or want ’em anymore. Sayonara!