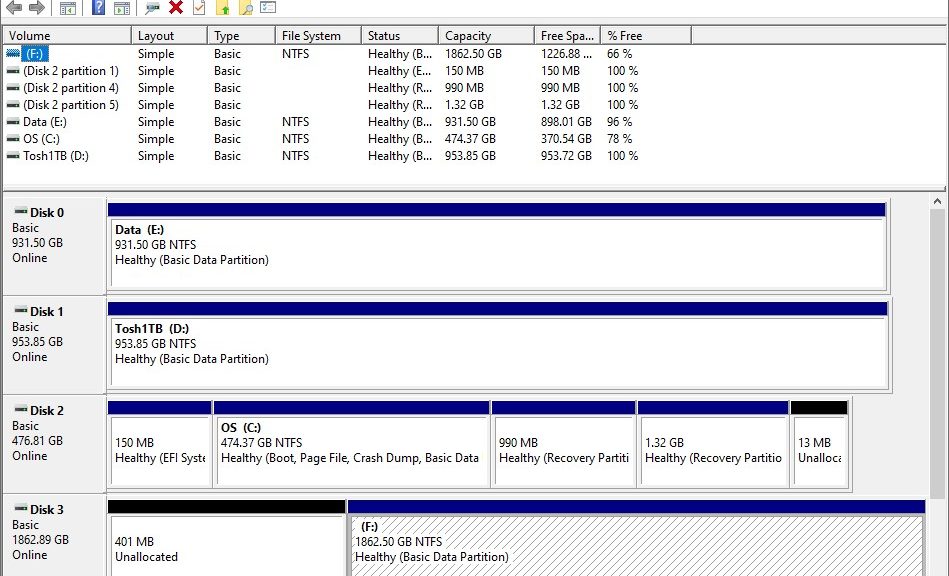 In installing the Kioxia (Toshiba) M.2 SSD late last week, I was reminded of something interesting. Hence this article title: new device may require second reboot. In my rush to set up and learn more about the drive, I was initially surprised to find it absent when I first ran Disk Management (diskmgmt.msc) to get that process going. Then it hit me: maybe it’s not showing up in UEFI.

But to access UEFI, another reboot was required. And by the time i did that, sure enough the device appeared in the list of drives present in the 7080. However, I had to reboot a second time to see the UEFi/BIOS settings and that produced the results I was after.

Sure enough, when I rebooted a third time to get into Windows, the drive appeared in the Disk Management utility. I was able to choose GPT disk layout, and to format the drive as a single contiguous volume named Tosh1TB. It shows up as “Disk 1” in the lead-in graphic for this story, in fact.

What sometimes makes a second boot necessary is the way that UEFI/BIOS supports device enumeration. On many laptops, certain changes to the hardware — especially RAM changes — automatically trigger a trip into the BIOS interface upon the next reboot. This gives admins a chance to make and review config changes before booting back into the OS.

Adding the Kioxia (Toshiba) 1 TB SSD didn’t trigger the UEFI on its own. But when I rebooted and forced a trip into that environment, the Toshiba device (identified as such in BIOS, not as Kioxia) appeared along with the primary SSD. The second trip was enough to see the device recognized in BIOS/UEFI. In turn this made it accessible to Windows when I returned to that environment. That’s how I was able to choose GPT layout, format the drive, and give it the name that appears in the screenshot above. Case closed!

If you find yourself in similar straits sometime, try another reboot (or two, actually). That will probably get the device recognized and make it available to Windows. Only if this fails should further troubleshooting be needed.  In that case, I’d start looking into possible SATA lane conflicts next.