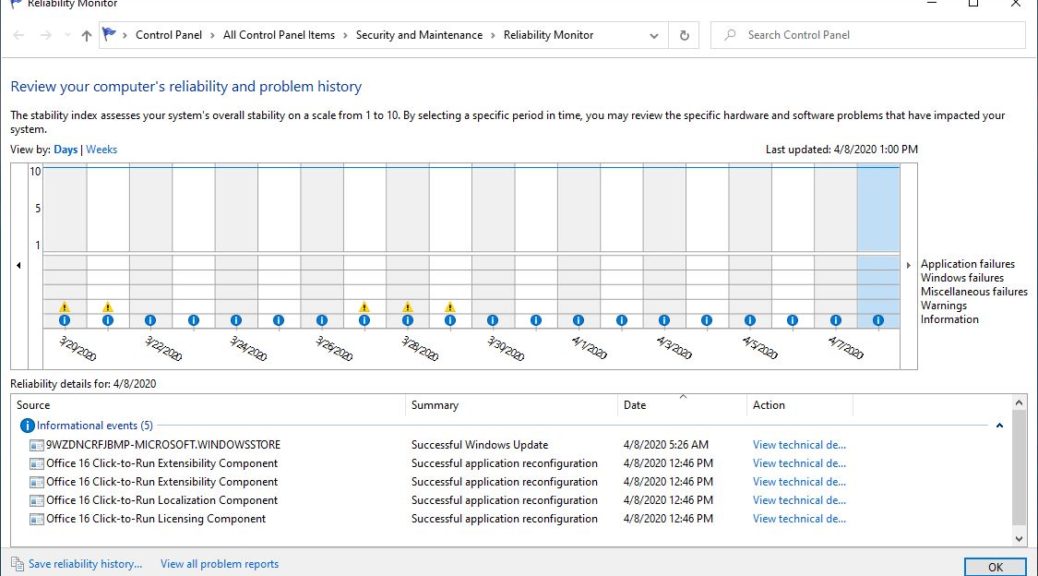 I’m a big fan of Reliability Monitor. This is actually a strange and useful offshoot from Performance Monitor (aka perfmon or perfmon.exe). As I will explain, little gotchas from tales of two Relmons actually shed more light on system health than a straight-line perfect 10 rating across the board.

That’s what makes the tale of the second relmon (the first appears at the head of this story) more informative, in fact. Interestingly, type perfmon /rel into the search or run boxes for a quick launch method. Reliability Monitor (RelMon) does a good job of tracking and reporting on errors that occur in day-to-day Windows operation.

Over the years, I’ve learned to rely on RelMon (a) to check on the general health of my systems, and (b) as a place to look when noticeable errors or crashes occur. Those red Xs provide a strong visual clue when something isn’t right. Also the details RelMon delivers to back things up are helpful. They often provide important clues in deciding if a problem needs addressing, and if so, how one might start down that path. Here’s the second of the two RelMon outputs I’d like to present today: This report from my production X380 Yoga, shows minor niggling errors. Most come straight from Windows 10 components or apps, in fact.
[Click image for full-sized view.]

My first instinct when looking at “red X” detail in RelMon is to see what kind of software or other system component threw the error. Most of them, as with the preceding screencap, appear in the “Application failures” line. That means they report some kind of application or app error.

In general, I’m a lot less worried about those than I am about Windows failures (line 2) or Miscellaneous failures (line 3). That said, let’s look at what caused a nearly 3 point dip on March 27. Two errors are reported. One is a Lenovo software component (probably associated with Lenovo Vantage, which I use for driver and BIOS updates). The other is the Settings application itself. The Lenovo item shows up as an Explorer shell extension: the problem event name BEX64 is quite familiar. In the other error, the Settings app stopped communicating with Windows and was closed. In other word, Settings hung for one reason or another. No big deal: happens sometimes, but not often. An explorer restart fixed this: read all about it at Win10.Guru.

When RelMon Spurs Me to Act

In contrast, let me recite a recent list of items from RelMon that have spurred action and repair maneuvers:

Most of the time, when a RelMon error calls for action, you’ll be able to figure that out quickly. Sometimes, if it’s an essential Microsoft component, all you can do is report the error via Feedback Hub, and hope for a speedy patch or fix. But with time and experience, these things will sort themselves out. If something you don’t need, use, or perhaps even want causes a problem, it may just be best to uninstall or remove it.