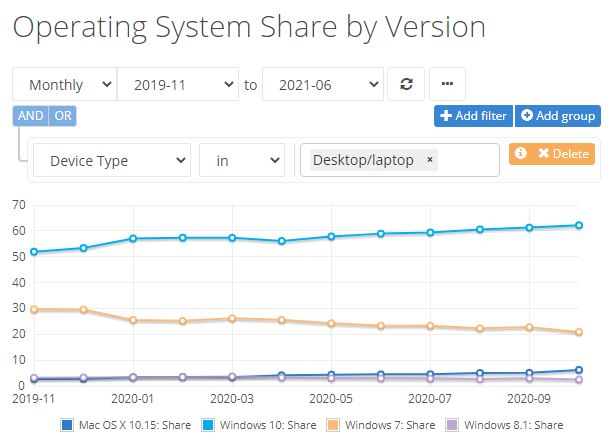 The old saying goes: “The numbers don’t lie.” Alas, I’ve been messing with numbers long enough to know that they don’t always capture the whole truth, either. Please indulge me for a moment, while I make a case for the size of the Windows 7 PC population. Warning! That case leads to the question that headlines this item: Are over half-a-billion Windows 7 PCs still in use? Sounds a bit high, as numbers go, so I’ll lay my reasoning out.

Why Ask: Are Over Half-a-Billion Windows 7 PCs Still in Use?

According to NetMarketShare.com, the platform version numbers for Windows 10 stand at 57.85% of desktops, versus 24.79% for Windows 7. MS has recently asserted that 1.3B active monthly users run Windows 10. Using that as a baseline, I calculate that if this number is accurate, there must be just over 557M Windows 7 PCs in use by proportion. How many of these are VMs, and how many are physical PCs is anybody’s guess.

Let’s say that 2 of 3 Windows 7 instances run on physical PCs just for grins. That would mean 557M Windows 7 OS instances translate into around 371 million devices running this now-obsolete OS. Recall that EOL for Windows 7 hit on January 14, 2020, 10.25 years after it debuted on October 22, 2009. These machines will be prime candidates for Windows 10 upgrades, because in all likelihood most of them will be unable to meet Windows 11 hardware requirements.

Another Question Comes to Mind…

As I tweeted last Friday, this raises another question. That question is: Will Windows 11 hardware requirements spur an uptick in Windows 10 installs, as older Windows 7 PCs get a “last and final” upgrade? Personally, I’m inclined to believe the answer is “Yes.”

Here are my reasons for so believing:
1. Because Windows 10 EOL is October 14, 2025, that buys time for home and business (mostly small business) users to save up for a hardware refresh to make themselves Windows 11-ready.
2. It reflects common practice in upgrading, where many users — again, especially those in  SMBS — deliberately trail the leading edge of Windows releases in the name of improved stability, reliability and understanding.
3. It’s always easier and cheaper (at least, in terms of current cash flow) to defer upgrades and hardware purchases until later, rather than to act sooner. That said, it gives more time for planning, lets others do the hard work of pioneering, and offers greater comfort in making changes at a time of the buyer’s choosing.

How all this actually plays out remains to be seen. If my numbers have any bearing on what’s out there in the real world, things could get interesting. I have to believe the big OEMs — Lenovo, Dell, HP, and other players (Acer, Asus, LG, and so forth) — are pondering this closely and carefully. I’m betting that PC sales will remain strong until 2026 and beyond, though probably not at pandemic levels, as the workplace returns to more customary modes of operation. Stay tuned: I’ll keep you posted.