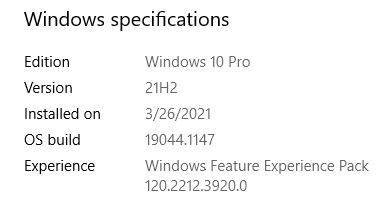 OK, then. The Windows release environment has now forked. Those PCs running the Release Preview version of Windows 10  can go one of two ways. Those who don’t meet Windows 11 hardware requirements get an upgrade to 20H2 (Build 19044.1147) . The others get an invite to upgrade to Windows 11. Because my 2014 vintage Surface PC  falls into the first category, that Surface Pro 3 gets 21H2 feature update. The lead-in graphic provides more info, from Settings → System → About.

If Surface Pro 3 Gets 21H2 Feature Update, Then What?

This reminds me that Windows 10 has a planned life until October 2025. That’s 50 months from now, not counting July 2021 in the tally (50.35 months, countlng the 11 days remaining in this month). I find myself reconsidering hanging onto the old but still reliable SP3 as a way to keep up with Windows 10 even as most of my PC fleet switches over to Windows 11 later this year.

Other businesses and organizations may find themselves forced to straddle this fork, too. That’s because not everyone will be able to replace older hardware right away to make themselves Windows 11 ready.

Life on the Trailing Edge of Technology

If my experience with many small businesses is any indicator, Windows 11 will probably provide a wake-up call to those still running Windows 7. At least, most such systems will upgrade to Windows 10 and can keep running until October 14, 2025 when Windows 10 End-of-Life hits. This adds another 50 months to the planning and upgrade cycle, at which point businesses will find themselves more or less compelled to “move on up” to Windows 11.

NetMarketShare still reports the Windows 7 population as just under 24.8% of overall desktops. I think it’s pretty safe to guesstimate that 80-plus percent of those PCs won’t meet Windows 11 hardware requirements on grounds of boot type (MBR vs. UEFI), CPU generation (7th or lower, mostly lower), and lack of TPM 2.0 support. This could lead to an upswelling of Windows 10 numbers, even as that OS marches toward its own EOL date.