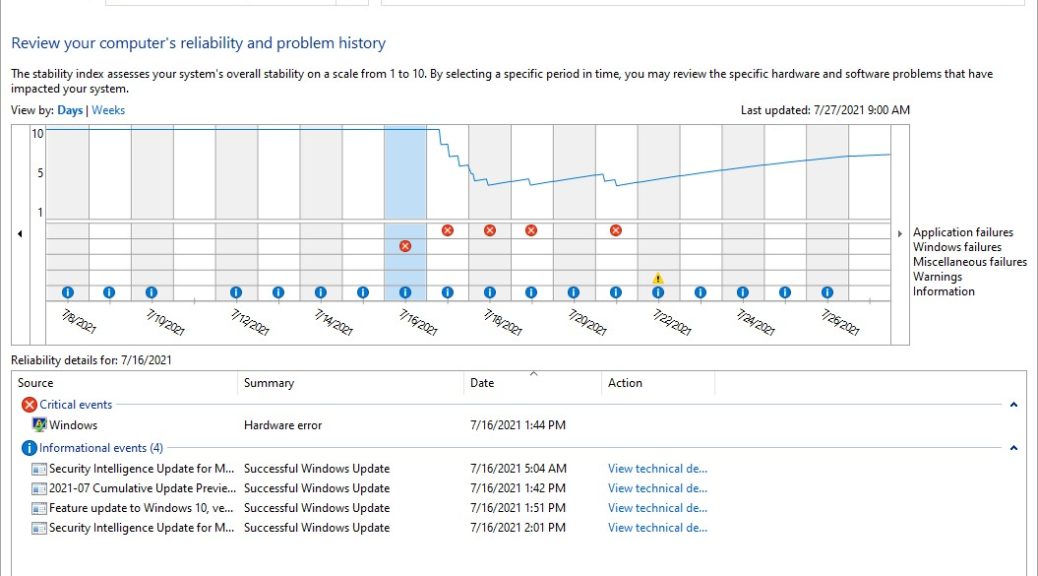 I’ve got one lone test machine running the “other path” for older Windows hardware — namely the 21H2 Feature Update released on 7/16/2021. Here, I recite my 21H2 Preview Experiences after two weeks. While I’ve not encountered any show-stoppers, the Reliability Monitor report that appears above says it all. As is not untypical for new release forks, this one’s got some minor gotchas.

I’ll start with a list of all errors reported in the foregoing Reliability Monitor screencap.

Upon examination, the error sources mostly originate from Windows itself. Only Windows Desktop Gadgets (which occurs twice) is a third-party app. The rest of the stuff is OS components, hardware, or built-in Windows apps.

IMHO, this kind of behavior is typical for a new release fork. It indicates a shakeout from current preview status on the way to something more stable. It’s only July and the release probably won’t happen until October, so there’s still plenty of time to get things right. If what I’m seeing right now is any indication, what needs fixing is mostly minor stuff.

I would say this augurs well for those who plan to upgrade to 21H2 on production PCs. If your PCs won’t meet Windows 11 upgrade requirements, they should be able to run Windows 10 until EOL in October 2025 without too much fuss or bother. Good stuff!