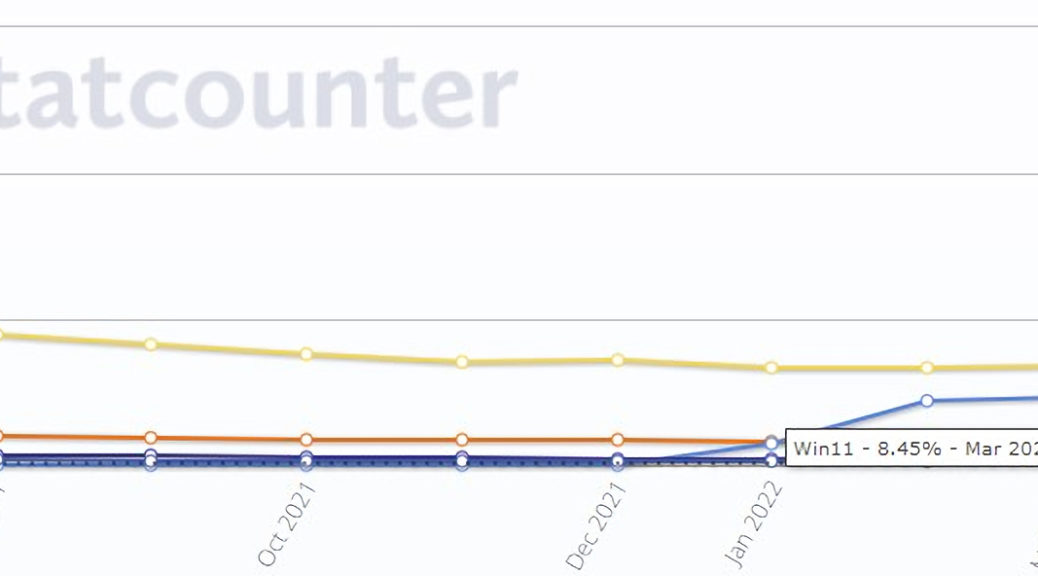 Though the numbers vary between AdDuplex and StatCounter, the growth rate for Windows 11 for March 2022 shows only slight change.  For the former, share went from 19.5 to 19.7%; for the latter, from 7.89 to 8.45%. Not much growth in Windows 11 uptake and deployment March 2022, in other words. What does it mean? I have some ideas, so please let me share them.

Aside from Microsoft’s own in-house deployment of 190K-plus copies (see this Thurrott.com story with MS pointers for more info), major corporate or organizational migrations to the new OS are mostly still pending. This is no surprise, because migrations usually take a year or more to plan, and at least 6 months to complete. Double those numbers for the largest organizations. Simply put: business use of Windows 11 for medium-sized businesses and larger is slim to none.

So who’s using Windows 11? Aside from pilot projects and evaluations (which are ongoing in business or organizational circles), there are two major populations running Windows 11:

This is my foundation for claiming 500M PCs could be running Windows 11 by the end of 2022. Right now, I’d be surprised if that number exceeds 300M. But it’s still a consumer/end-user thing, and likely to stay that way until 2023 and beyond.

The Long Tail Goes On and On…

I had my eyes checked late last month. Last year, all of the shop’s systems still ran Windows 7. Now, the front of the house (receptionist, sales staff, technicians) are on Windows 10. Both of the on-staff ophthalmologists, however, are still on 7. I have to guess that for most small-to-midsize operations that’s a pretty normal thing. Bigger companies are more likely to be on 10 now that EOL support for Windows 7 is so expensive, and “running naked” (i.e. unsupported) so dangerous and unattractive.

With EOL for Windows 10 not until October 2025, there’s still plenty of time to start thinking about Windows 11 migrations . . . next year!