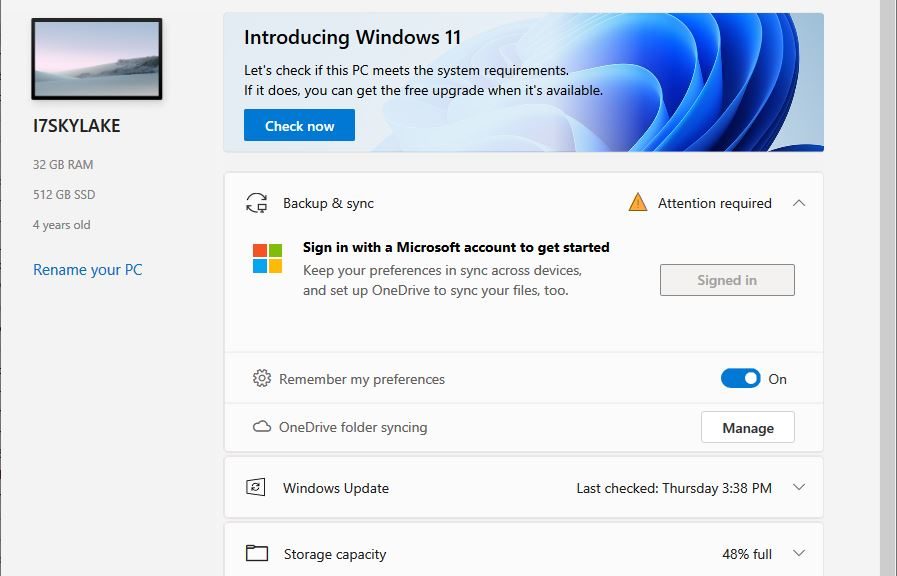 Now that MS has done the big reveal, I can affirm the rumors — and the existence — of Windows 11. So without further ado, I downloaded the new PC Health Check tool (find a link in the final paragraph of this story). It comes in .MSI (Microsoft Installer) format and installs quickly and easily on most PCs. Digging into the Windows 11 Health Check details, though, I fell victim to at least two rude surprises. Maybe more: read my story, then you tell me… In his story about this tool, WinAero.com principal Sergey Tkachenko lists the Windows 11 hardware requirements as follows (quoted verbatim):

Actually there’s a bit more to it than that. Interested parties are advised to check these official MS items: Find Windows 11 specs, features and computer requirements and Windows Processor Requirements. They led me to some interesting but depressing realizations, including:

My production PC, which I’d been planning to refresh, is ineligible because it runs an i7-6700 CPU and has no TPM chip. My son’s desktop is in the exact same boat. Then there’s the Surface Pro 3, which runs a 4th Gen Intel CPU (i74650U). And of course, I’m waiting to give away the Ivy Bridge (2nd Gen Intel i7-2650M) to Reglue.org as soon as they can send somebody by to pick it up.

Change Is Coming, Sooner Not Later

Looks like I need to refresh two desktops before the holidays (when Window 11 is scheduled to go public). I’m guessing October, to give shoppers time to buy Windows 11 equipped PCs before Xmas. Looks like I will also give the Surface Pro 3 (with dock, alternate keyboard, and other accessories) to ReGlue, too.  Time to revisit my bill of materials for those builds, and get the orders flying! I’d hoped to wait until GPU prices came down, but will just re-use the GeForce 1070 Ti cards in those two desktops in the meantime.

In response to feedback from users that PC Health Check’s info was insufficiently detailed, the company has already released a new version. It’s much more informative. Thus for example, it now spells out what I had to visit several tables to figure out on my own — namely, that the 6th gen i7 in my production PC is not supported: Now, the tool spells out specific causes for incompatibility.

Thus, interested readers should be sure to grab the latest version of the tool, available at https://aka.ms/GetPCHealthCheckApp. I’ve turned off the out-of-date link at the head of the story to help readers avoid confusion. Kudos to MS for responding to useful user input so quickly and effectively!