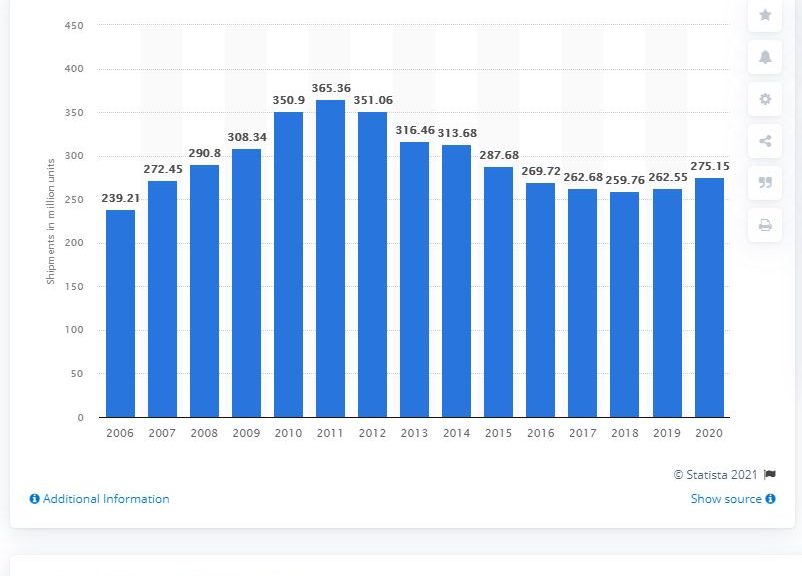 Figure the number of PC sales based on Gartner’s Q1 projections against 2020, and total PC sales for 2021 could top 363 million. Take that into account along with data shown in the lead-graphic  from Statista. You’ll get an astonishing ratio: at least three-quarters of PCs sold can’t run Windows 11. To be absolutely clear, that means PCs sold between 2006 and 2021. Thus, I am assuming that PCs built in 2005 or earlier are unlikely to skew this estimate. And if they do, they will skew it away from Windows 11 anyway…

Microsoft currently claims 1.3 B active monthly users for Windows 10. I think that puts the size of the active global PC population lower than 4.8B units sold 2006-2021. I’m inclined to believe this means that the ratio could be more in Windows 11’s favor than my sales-based analysis indicates. Even so, it’s indisputable that three-quarters of PC’s sold since 2006 can’t run Windows 11. What’s in question is how many of the PCs sold from 2006 to 2014 or so remain in use.

I just gave my old Lenovo X220 Tablet (built in 2011 and purchased in 2012) away. That’s because it really didn’t run Windows 10 all that well any more (Insider Preview Dev Channel, that is). I cheerfully concede that for PCs in regular use, the ratio may be more like 50-50 when it comes to those that can, and can’t, run Windows 11. At my house, the actual ratio was 60-40 (can/can’t).

Still, that’s an evocative ratio. It indicates that many users must consider a hardware refresh plus an OS upgrade to get to Windows 11. I believe it applies across the board, too. And by that I mean among households and consumers, plus businesses and organizations at all scales.