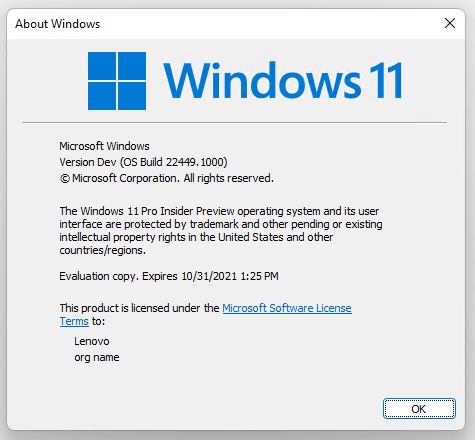 Just yesterday, September 2, the MS Windows Insider team re-forked the Beta and Dev Channels for Windows 11. The Windows 11 Dev Channel goes Nickel. Thus, it picks up a new release branch where experimental features not tied to specific upcoming releases can be exposed and explored. Note the major Build number in the lead-in graphic. It jumps to 22449, far ahead of other build numbers of any sort.

The Beta Channel, on the other hand is still tied to 21H1 and Build 22000.  As the upcoming Windows 11 release date — October 5 — edges ever closer, that should remain constant. Beta will be the focus for bug hunts and ongoing fixes. The run-up to that GA date (32 days away as I write this story) should be interesting.

Finally, these two release forks now diverge. I predict Beta will continue to track “the next, upcoming Windows 11 release.” Dev will show us what’s possible but not inevitable for future releases .

When Windows 11 Dev Channel Goes Nickel, What to Expect?

MS has already warned Insiders about future Dev channel releases. They will be less stable and more subject to gotchas and bugs. The 22449 release blog says (emphasis mine):

These builds are from the earliest stage in a new development cycle with the latest work-in-progress code from our engineers. These aren’t always stable builds, and sometimes you will see issues that block key activities or require workarounds while flighting in the Dev Channel. It is important to make sure you  read the known issues listed in our blog posts as we document many of these issues with each flight.

And please: if you participate in the Dev Channel, I urge you to follow Microsoft’s advice. That is: “read the known issues” as each new upgrade emerges. More than once, I’ve been bitten because I jumped first, and read the issues list second. Thus, I’ve learned from first-hand experience, little of it positive, to heed that warning.

I’m glad to see this happening. I look forward to what emerges in  Dev Channel releases going forward. That’s why I joined the Insider Program to begin with. It’s why I look forward to bashing bugs, reporting (and learning from) issues, and making things work. For some of us in Windows-World — including me — this passes as entertainment!