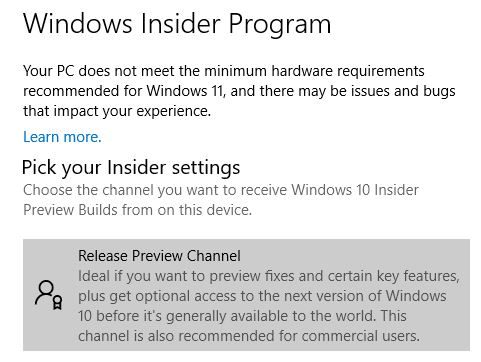 On September 15, MS released the new Insider Preview Build 22458 into the Dev Channel. Widespread reporting indicates that the build won’t install on target PCs that don’t meet Windows 11’s TPM requirement. Thus, it’s fair to say that Windows 11 22458 enforces TPM support. In other words, that build won’t install on older PCs unless the user resorts to one of the well-known workarounds documented to bypass this limitation.

Indeed, for PCs already in the Insider Program, a visit to Start → Settings → Update & Security → Windows Insider Program will recommend against making such an attempt. This warning appears as the lead-in graphic for this story. It comes from my Surface Pro 3, whose 2013-vintage 4th generation CPU and lack of TPM 2.0 support put it outside the scope of Windows 11 requirements.

Were I to try it on that machine anyway, I would get an error message and my attempt to install 22458 would fail. Here’s a snip from WinAero.com that shows what this would look like:

I’m playing things straight. The PCs I can’t upgrade to meet Windows 11 requirements will stay on Windows 10. The Surface Pro 3 is a great example. Most of my fleet already meets those standards. I’ve got one more PC — my production desktop — to upgrade to match those requirements. I’m going to try to get it done this weekend.

But for those who don’t mind — or outright enjoy — flouting MS requirements, there are workarounds based on ISO installs and registry hacks that bypass the TPM and other hardware checks. MS recommends against such tomfoolery and warns those who indulge that future security updates may not be provided for out-of-spec machines. That isn’t stopping a lot of folks, as the “Let’s run Windows 11 on … incompatible hardware” thread at Elevenforum.com clearly indicates. To these brave stalwarts I say “Have fun, but keep a backup handy, and be ready to roll back to Windows 10 when and if that’s needed.”