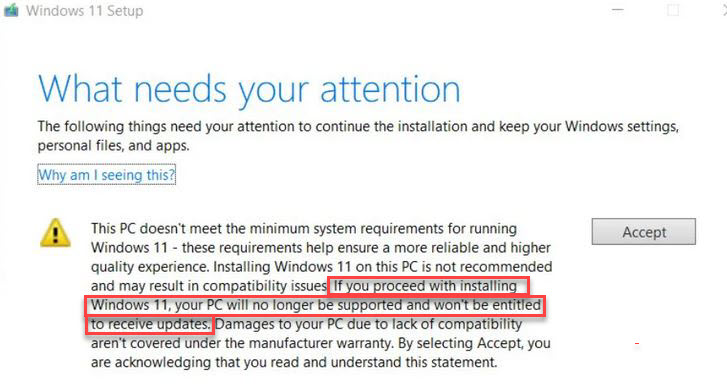 Things are getting interesting for those who want to install Windows 11 on out-of-spec PCs. By “out-of-spec” I mean  devices that don’t meet Microsoft’s Windows 11 hardware requirements. Check the warning that Microsoft insists that users accept before allowing installation to proceed. It appears in the lead-in graphic for this story. I’ve boxed the key sentence in red therein. It reads: “If you proceed with installing Windows 11, your PC will no longer be supported and won’t be entitled to receive updates.” This raises the question in the title —  “What is Windows 11 update entitlement?”

Answering: What Is Windows 11 Update Entitlement?

The upshot of this warning has three consequences. First, it means MS won’t block users from installing Windows 11 on out-of-spec PCs. Two, it means MS could withhold updates from those PCs at any time.  At least, that’s how I read the phrase “won’t be entitled to receive updates.” Third, out-of-spec PCs running Windows 11 won’t be eligible for MS support  should problems present.

This information (and the screencap that leads off this story) comes from The Verge. It is entitled “Windows 11 won’t stop older PCs, but it might make you sign this waiver.” Its subtitle reads “Microsoft reserves the right to deny updates.” The staff obviously concludes that a lack of update entitlement equates to a “right to deny updates.” I concur with this logic.

The Verge story cites further to a “perfectly good 7th-gen Core i7 desktop gaming PC.” On it, the author has “already installed Windows 11 and [is] running it with no major issues.” This strikes a potent nerve with me. Why? Because I’m typing this story on my production PC. It includes an i7-6700, an Asrock Extreme7+ mobo, 32 GB RAM, and Samsung 1TB 950 NVMe SSD. This machine is also quite able to run Windows 11. That said, it fails requirements checks because of CPU, TPM and Secure Boot support.

Lots of people and businesses have older PCs able to run Windows 11.  Some believe they’re being unfairly prevented from upgrading. And again, that’s true right now. But I believe MS has plans for Windows 11 not yet disclosed. As those plans unfold, new OS features and capabilities could call on PC hardware in ways the current version does not. I must guess that such calls would force MS to deny related updates on out-of-spec PCs. If such updates demand certain capabilities, and some PCs lack them, that makes sense. Only time will tell. We’ll just have to wait and see what happens.

One thing’s for sure. Speaking purely for myself, I have zero inclination to push my luck on this front. That’s why the parts for my desktop hardware refresh to meet Windows 11 requirements are sitting in my office right now. I just need to make time to make that refresh happen. Sigh.