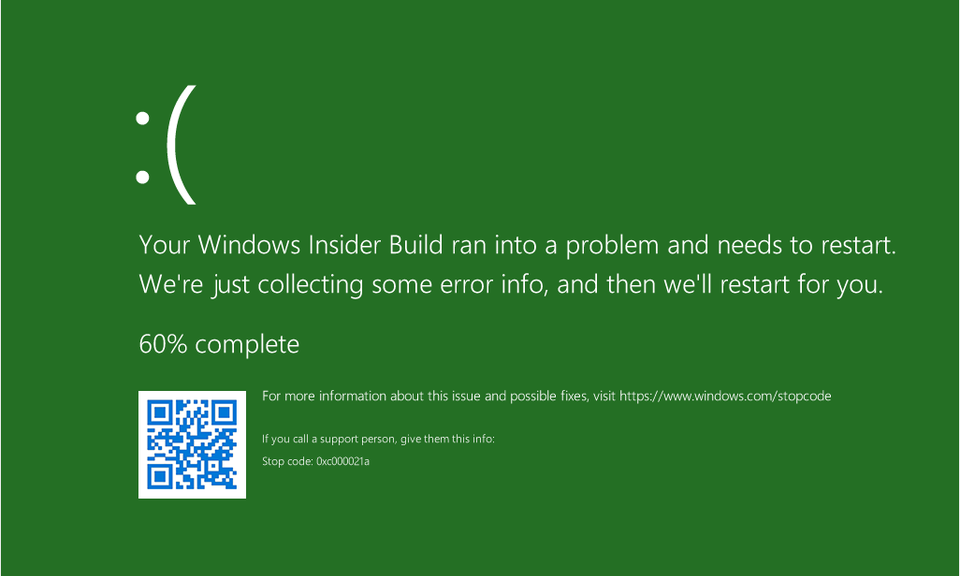 I’m seeing numerous reports in the news that in Windows 11, a stop error produces a screen with a black background. You can provoke such an error, often known as a BSOD (Blue Screen of Death, irrespective of color) on Windows 11 quite easily. Simply open Task Manager, go to details. right-click on svchost.exe and select “End process tree.” This will immediately crash your PC, and show you the stop code for CRITICAL_PROCESS_DIED. When I do that on both of my Windows 11 test machines, I get a GSOD (Green Screen of Death) that’s identically colored to the lead-in graphic for this story. What color is your Windows 11 BSOD?

Why ask: What color is your Windows 11 BSOD?

Over the years, I’ve seen them in various shades of blue and green. I’ve never seen a black one. I still can’t see one now. Thus, I’m guessing that the background color for a BSOD/stop error probably depends on some background or appearance setting in the OS. Otherwise, the claims I’m reading online that the background is black would also show up on my test machines.

In fact, this assertion is showing up in dozens of news stories. Thus, I find it both interesting and vexing that when I tried to confirm this for myself, both of my test machines came up with a green background instead.

One Case Does Not Make a Transformation

I think what may be happening is that some people will indeed see black as the BSOD background. Some will see green (including me). I’m curious to know if other colors will present. it’s most interesting that such changes can lead to pronouncements that somehow remind me of a certain Rolling Stones song…

And that’s the way things go here in Windows-World. Often it’s something odd and hard to explain, if not mysterious, like this one!

Update Added July 3: It’s a Possibility, Not a Fact

Now I get it! It’s a claim that originates from Tom Warren at The Verge, who writes

I guess that means I have to keep crashing my Windows 11 test machines after each upcoming new Build, to see what color the BSOD takes on. Eventually, if Mr. Warren is correct, that background will go “back in black” to call an 80s anthem to attention. Stay tuned!