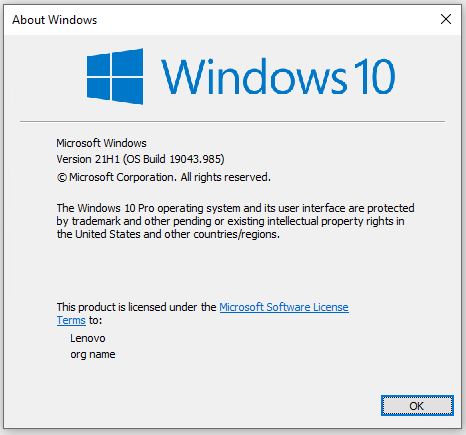 OK, then. I’ve got an eval unit of the sturdy, stellar little Lenovo X12 hybrid tablet PC here in the office. I just had a simply stunning ThinkPad X12 21H1 upgrade experience. I swear to tell the whole truth and nothing but. I copied the self-installing upgrade (.MSU) file over from my production PC, and the whole thing ran to completion in under a minute. Maybe under 40 seconds. It was FAST!

Given that this PC is probably less than two months old, I’d wondered why MS hadn’t offered the 21H1 enablement package automatically. So I decided to push my luck, and use the self-installing upgrade file on that machine instead.

That file comes burdened with this incredibly long name:

I’ve never seen anything like it before. Sure, enablement packages are meant to short-circuit the upgrade process, and speed it through to completion. But gosh, this is ridiculous! I’m pretty sure the whole thing took less than a minute, and perhaps under 40 seconds to complete and let me run the winver command that produced the lead-in graphic for this story. So far, this eclipses any enablement package I’ve ever installed by at least a binary (if not decimal) order of magnitude.

I’ve been dealing with enablement packages for Windows 10 since the 1909 version came out in September, 2019. I’ve never seen anything like this before. Frankly, given that WU didn’t offer the enablement package to the X12 on its own, I was more than a little apprehensive about the resulting outcome. I shouldn’t have worried: it’s amazing!