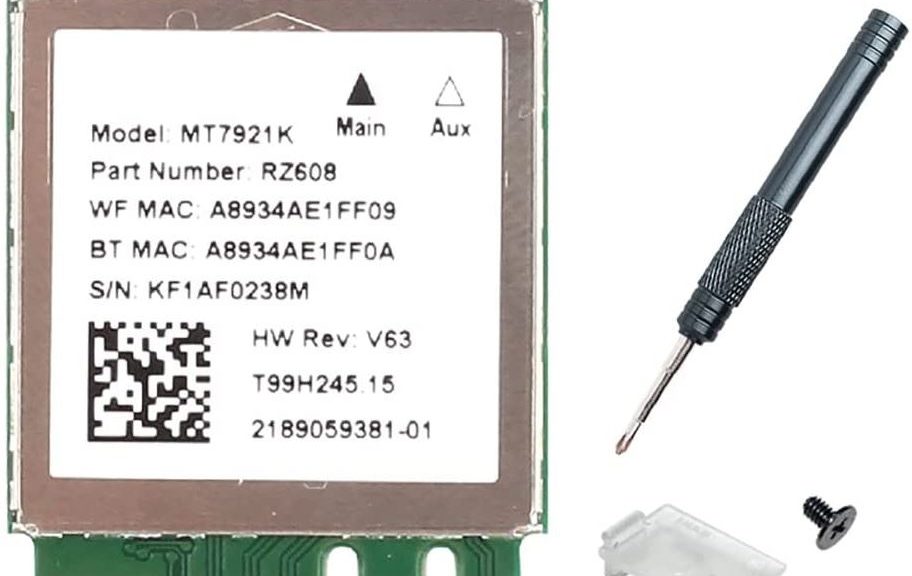 It’s always the little things that jump up to bite you (or me, anyway). In today’s case, it was my blithe assumption that Intel Integrated Connectivity (aka CNVi) wouldn’t prevent the AX201NGW M.2 Wi-Fi card from working on my AMD B550/Ryzen 3 5800X build. Yeah, right! But when I replaced it with a no-name (REKONG) Media Tech MT7921K module (depicted in the lead-in graphic), Device Manager picked up that non-Intel hardware immediately. After a bit of driver fiddling, this US$29 (tax included) nonCNVi M.2 Wi-Fi Device delivers LAN access as it should. It does have interesting limitations, though . . .

At first, after plugging in the device, I saw only non-working BlueTooth and Network Adapter devices in Device Manager. This informed me that Windows couldn’t find the required drivers on its own. But a quick search on “Windows 11 drivers for MT7921K” quickly turned up what I needed. They’re available from Lenovo, as it turns out, with a separate .exe for each of Bluetooth and Wi-Fi.

As the owner/operator of half-a-dozen (or more) Lenovo laptops, I’m quite familiar with their self-installing drivers. After downloading and installing them, here’s what I see in Device Manager: With the right drivers installed, the BT components and the Wi-Fi interface all show up. Good!

Wi-Fi behavior on desktops can be interesting. The interface has a tendency to turn itself off upon reboot, I’ve learned. I’m also trying to figure out why I can access the LAN (via the nearby Asus AX6000 router), but I can’t yet get Internet access through this interface. I have a wired GbE connection that works fine, but had hoped to switch over to wireless. So now, I’m researching those two issues in hopes of finding solutions soon.

No External Antenna Is NOT a Plus

I’m increasingly inclined to observe that an M.2 Wi-Fi card makes sense only where close proximity to a WAP is available. It’s probably not a good idea for machines that do lots of heavy upload/download stuff, either. That’s kind of what I wanted to learn more about, so I’m not disappointed by this experience. I feel like I understand the capabilities and limitations of these devices much better now. I will keep my GbE wired connection going forward, too: the M.2-based Wi-Fi is not fast enough for my needs. If I’m ever *forced* to go wireless, I now understand that a PCIe device is my fastest option.