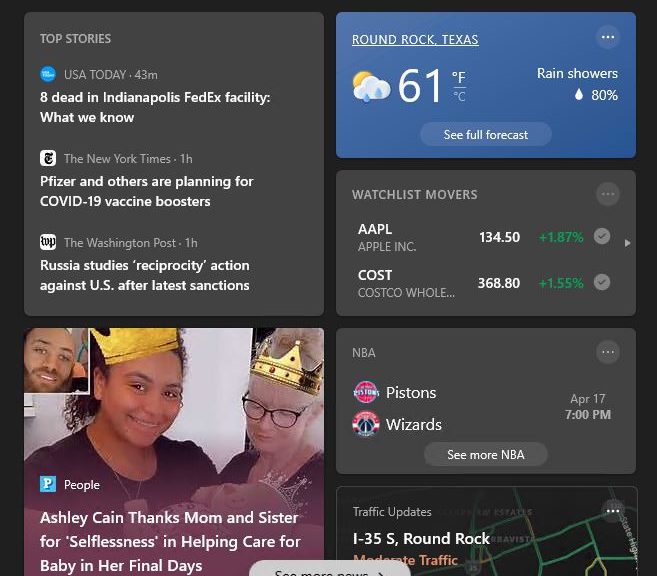 Just over a week ago, I wrote a post here bemoaning my Dev Channel test PCs’ lack of the News & Interests notification bar feature. It has been in A/B test mode — that is, available to some but not all Dev Channel PCs — for months. It’s a gamble of sorts whether one gets such features or not, and explains that post’s title: Losing Win10 A/B Testing Wagers. But with the release of Build 21359, News & Interests gets general Dev Channel release. My two Lenovo ThinkPad test machines — the X380 Yoga and the X220 Tablet — now sport this new feature, fully-realized.

The first I noticed after rebooting into 21359 was that N&I (my shorthand for News & Interests) was still MIA. A quick check on the Windows Insider MVP Yammer community told me two things:

This worked perfectly on my X220 Tablet where I’d left hidden feature tweaking alone. My X380 was another story…

I’m not the world’s most patient guy. When I learn about A/B feature testing in Windows 10 and I’m not on the receiving side, I’ve been known to turn to hacking tools to turn them on anyway. One such item, named ViVeTool, comes from developer Albacore aka thebookisclosed whose work I’ve been following for years. Here’s how he describes this offering “ViVeTool is … a straightforward tool for power users which want to use the new APIs instantly … to interact with Windows 10’s A/B feature mechanism.” In other words, it lets you turn on what might be turned off in your image, or vice-versa.

I’d done that on the X380 Yoga some while back. But this tweaked N&I did not work properly on that machine. “Hmmm” I wondered “could ViveTool be responsible?” It seems to have been. Once I enabled, then disabled the ViveTool settings for N&I, then rebooted again, it worked perfectly on the X380 Yoga, too.

I’ve learned a lesson from this. From now on, if I want to mess with the base test image for Windows 10 that MS gives me, I’m doing it in a VM. I can use snapshotting mechanisms to roll back tweaks quickly and easily. I feel lucky that do/redo with ViveTool in 21359 set things back to rights so that N&I could work as designed. Otherwise, I’d have been forced to clean install that build to heal my own self-inflicted wounds.

If you want to play or tweak, I recommend you do so in a safe and pseudo-sandboxed way. That’s my approach from now on. It comes with the ability to fool around as one likes, without having to live permanently with the results afterward. Please learn from my mis-steps and do likewise!