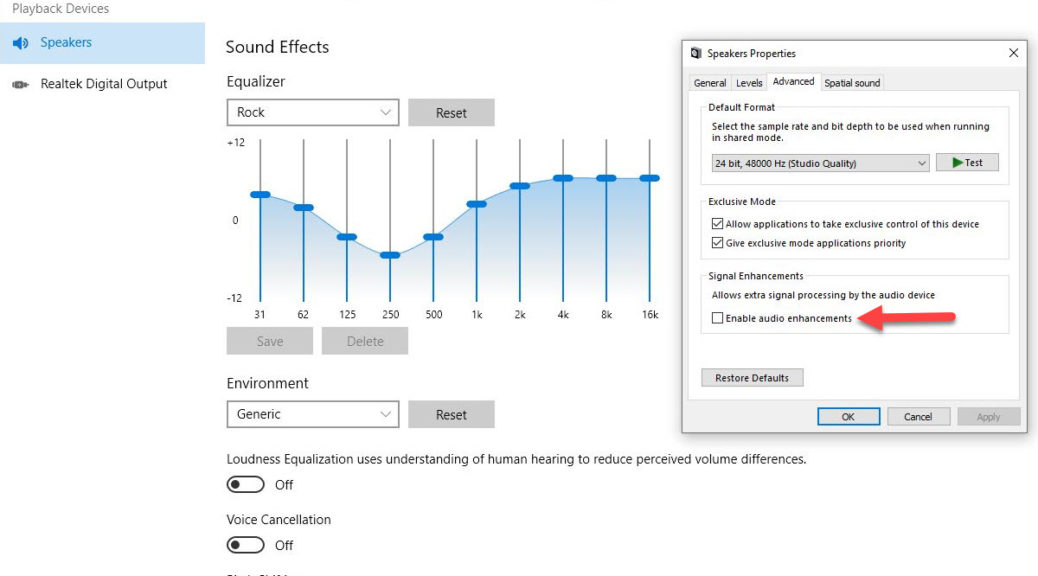 My first job out of college was in an archival sound studio at the Library of Congress. Believe it or not, they even send me to a summer audio engineering program.  (The Eastman School of Music, Summer, 1974.) In the nearly 4 years I worked there, I’d like to think I learned a little something about quality sound delivery. That’s why I’ve been chafing during recent attempts at escaping excess Windows Audio reverb. This morning, I finally fixed my problem on my production desktop.

First: a problem description. Any kind of music playback on my external speakers has sounded weird lately.  (When I play sounds in “the open air,” I use a set of Axiom Audio components. These inlude: L, R, and subwoofer speakers with external amplifier.)  Here’s my best problem description. On playback, music sounded like it was in a concrete stairwell or in a big tiled bathroom. From my years in the studio and subsequent experience, I knew it was a reverb problem.

First, I went poking around in the Realtek Audio Console app. It’s shown as the background for this story’s lead-in graphic. But none of the changes I made in the equalizer, or among its various settings options (Rock is show in the afore-mentioned screencap), made any difference.

Thus, I realized it had to be something in the old Control Panel Sound widget. It was. At one point or another I must have checked the box shown in the screencap foreground red-arrowed “Enable audio enhancements.” As soon as I unchecked that item, my excess reverb disappeared. Everything returned to normal and my various music sources sounded as much like their original recordings as my semi-pro sound chain (external amp and speakers) could deliver.

When in Doubt, Experiment…

I don’t think I would’ve been able to solve the issue if I hadn’t fooled around with the EQ presets in the Realtek Audio Console. As soon as it was obvious that this element in the audio software chain wasn’t responsible (I was sure I’d picked the “Club” or “Party” presets, both of which seem to boost reverb noticeably), I knew it had to be the Sound widget. And sure enough, whatever audio enhancement had kicked in when I checked that box made a BIG difference.

Fortunately, it was easily fixed and my tunes are now back to normal. Now the question becomes: what do I want to listen to today? As I finish out this post, I’m enjoying the alt-pop sounds of 90s British group “The SUNDAYS.” Good stuff (and it sounds like it oughter…).