I can’t help it. I still love Windows Gadgets. They came in — and went out — with Windows 7, supposedly because of security considerations. I’ve never had, nor heard of such issues in the wild. My old friend and security guru, Deb Shinder, also uses Gadgets. She feels the same away about their demise. Helmut Buhler created 8GadgetPack to bring Gadgets to Windows 8. He’s kept up with them, and they work well with Windows 10. (His current version is v29.0, released in May 2019, so it’s pretty up-to-date.) Each time you upgrade Windows, it sees Gadgets and kills them off. So he’s also written a “Restore Gadgets” routine that recognizes this act, and restores the pre-existing Gadget set-up after each OS-based cancellation. Lately, though, I’ve been posed an interesting Win10 Gadget conundrum.

The two following screenshots show the puzzler I’ve been dealing with lately. Notice the display at the bottom of the two CPU Meter Gadget windows that follow. It’s a CPU utilization graph, that shows per-core utilization percentages. The graph on the left-hand-side fills up the entire Gadget panel, while the one on the right-hand-side fills up only about two-thirds. After the most recent Nvidia driver update (which applies to the left-hand item) the Gadget on that PC went from a partial graph area (which applies to the right-hand item) to the full graph area. The PC from which the right-hand item comes is a Surface Pro 3 that uses built-in Intel graphics circuitry that’s built into the i7-4650U processor in that machine. The PC on the left is my production desktop, as the i7-6700 CPU should indicate. Careful inspection shows the utliization graph at the left fills the full Gadget frame, while the one on the right fills about two-thirds of the same area. What gives?

Here’s the conundrum: I’m pretty sure that there’s something in the nexus between .NET and the GPU driver that’s causing the CPU utilization display area issue. Installing Nvidia’s latest GeForce driver (Version 431.60, which shows a 7/23/2019 release date (but which I just installed today, 8/5/2019) on my production PC fixed the issue. It still persists on all of my systems running Intel on-chip GPUs.

A Minor Niggle Still in Search of a Fix

This is the kind of mystery that guarantees lifetime (or at least ongoing) employment for Windows wizards, gurus, and mavens. I’ll keep messing around with those Intel drivers until I find one that works like it’s supposed to. This has been going on at least since last February or thereabouts, though, so Intel’s obviously under no pressure to catch up with this minor and niggling little GUI detail. It gives me something to do when I get bored, so I can’t complain. And so it goes, here in Windows-World!

OK, so I updated my Lenovo T520’s graphics driver last night, too. It includes both an Intel on-chip GPU (HD 3000) and an Nvidia Quadro NVS4200M independent GPU. I updated the Nvidia device to Version 392.56 later yesterday afternoon. This machine had also been subject to the “reduced display” layout shown above for the Surface Pro 3. But after I remoted into that machine this morning, I immediately noticed that the CPU utilization graph at the bottom of the gadget now filled the entire pane, to wit: This time I loaded Core Temp so that the “not running” error message didn’t appear. Makes the utilization graph a little easier to see and appreciate. So somehow, updating the Nvidia driver (even though I’m not using it) fixed the problem. As a consequence, I’m rethinking my theory of what’s causing the problem. But on my Intel-only systems, the problem persists. I’ll keep working on it . . . 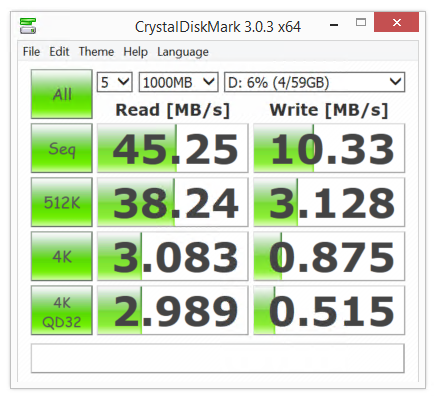 Now that I’m the proud owner of a Microsoft Surface Pro 3 (SP3), I’ve taken the plunge to buy into the largest microSDXC component currently available. These days, that’s a whopping 128 GB, which is an amazing amount of storage to cram into a device that’s about the same size as my pinky nail. I plunked down about $120 at Newegg for a SanDisk Ultra model that’s rated as a UHS-1/Class 10 device, which is supposed to make it the fastest device of its type around. Given that the device I’m currently using in the SP3 is rated the same — it’s “only” 64 GB in size, however, from the same maker — I’m not expecting blazing fast performance by any stretch of the imagination. This CrystalDiskMark output tells why, in its own inimitable way: These speeds are on par with a 5,400 RPM conventional hard disk. Sigh.

But I can use the extra 64 GB of space, primarily because I’m using File History and my Outlook files weigh in at around 11 GB all by themselves nowadays. My total file history space is running at about 13 GB at the moment, per snapshot. You don’t need much history at that rate to suck up 100 GB (or more) in a hurry. I’ve set the file history space cap at 20% of the drive’s space (the most File History will allow), which means I can go two versions back, at most.

I’ve also purchased a couple of 128 GB conventional sized SDXC cards from PNY as well (for $70 a pop, somewhat cheaper than the $120 that the micro format costs right now, owing to “newness and scarcity”). These will replace the 32 GB SDXC cards in my Lenovo X220 and T520 laptops, likewise to extend storage there as well. The performance results for that media will probably be even slower than that for the SanDisk media on display in the preceding screenshot, but that’s life in the storage game right now. A USB3 flash drive is undoubtedly faster, but they still don’t have the 64 GB (or bigger sizes) in the teeny-tiny “Atom-style” format familiar to those using Bluetooth or minimalist 802.11n (or older networking technologies) in their notebooks nowadays. When they become available, and I can leave them plugged in all the time, that’ll probably be my next flash storage purchase for these hard-working portable PCs.

The mail lady dropped off the new 128 GB microSDXC late this morning, and I had a chance to run some more benchmarks on the Surface later today. Here are some resulting screenshots, which I follow with some commentary: The Surface SSD on the left; 128 GB microSDXC on the right

The results show that the 128 GB SDXC device is a tad faster than its 64GB counterpart, and that both are significantly slower than the built-in Samsung MZMTE256 SSD. I’ll report on the full-size SDXC devices when they show up in the next few days as well.

Out of curiosity I decided to check on prices for 256 GB micro SDXC cards, one year after the first instances made their appearance, and one year after this post went live. I’m pleased to report that most 128GB devices of this kind now go for under $50, and you can find 256 GB [putative, it’s actually more like 240GB of actual storage inside Windows] devices for upwards of $65 to around $100 for all but the fastest such cards. Good news all around on the price front, then, especially those seeking to extend the capabilities of tablets with limited built-in storage (which I define as 64 GB or less, as is typical for most low-cost devices).