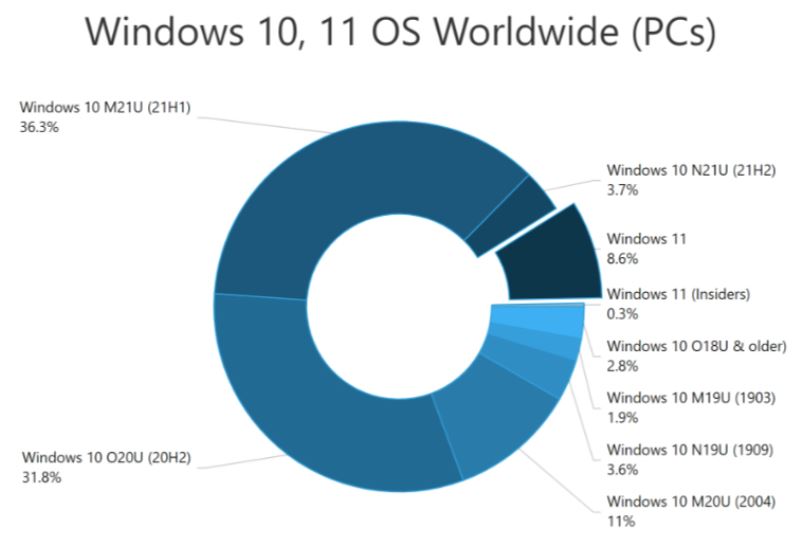 Reports have been popping up on the Internet like mushrooms after the rain. AdDuplex reports that the Windows 11 marketshare is 8.6%. (That’s the percentage of machines running Windows 11 as opposed to other versions.) Some sources report this as “closer to 10%,” others as “almost 9 %.” I say “Hogwash.” My best guess is something under 1%. Why do I put Windows 11 marketshare Q421 down low? I’m happy to explain.

The Truth About Windows 11 Marketshare Q421

Numerous other sites monitor OS marketshare stats. These include statista, netmarketshare and statcounter. For US Government website visitors analytics.usa.gov also counts. None of them registers or reports on Windows 11 yet. Thus, it’s hard for me to justify my numbers vis-a-vis somebody else’s.

That said AdDuplex bases its ratios on its customers. That set of users is known to differ from the global Internet population. I think we need to regard its recent reports with healthy skepticism. I’m also happy to wait for other marketshare sites to include Windows 11 in their tracking. Then, we’ll see what comes out of that.

Another Tack on 11 Marketshare

Let’s come at this another way. The total number of PCs in use worldwide, according to Gartner, is 1.896B units. Let’s say it’s 2B to make it a nice round number. 8.6% of 2B is ~172M. There’s simply no way that the number of Windows 11 instances in use is anything close to that number. If it exceeds 100M I’ll be flabbergasted. If it’s over 50M I’ll be surprised.

MS still claims that around 1.5B instances of Windows 10 are in use. 8.6% of that number is 129M. I don’t think Windows 11 is there yet, either. Let’s wait and see what other sites say as additional data points become available. In the meantime, care to put a small wager on the AdDuplex numbers? I’ll give you 3 to 1 odds …