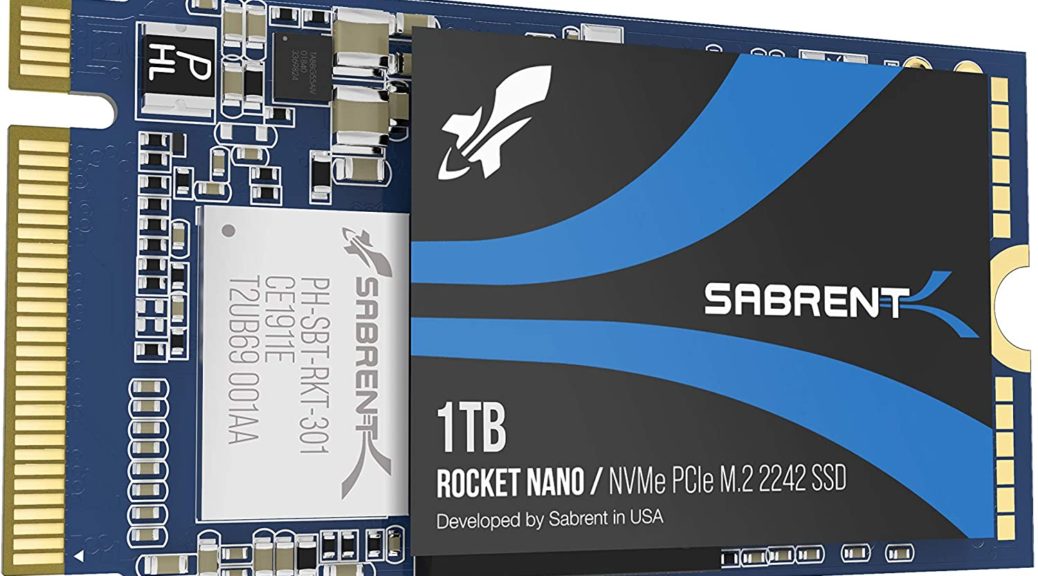 OK, then. I went and sprung US$150 for a Sabrent 1TB M.2 2242 NVMe drive at Amazon. It is depicted in the lead-in graphic above. The high-level sequence of events is as follows. Ordered on Wednesday, received and experimented on Thursday, reported on Friday (today). Alas, I seem to have hosed the drive and have started RMA negotiations with Sabrent. Along the way, I learned most of what’s involved in swapping X1 Nano NVMe drives.

As is almost always the case, there’s a YouTube video for that. It showed me everything I needed to do. Disassembly/reassembly were easy and straightforward. I had no mechanical difficulties. But once again, my US$7 investment in a laptop screws collection saved my butt. I mislaid one of the two NVMe holder screws (found it later during  cleanup). I lost one of the 6 battery restraint screws (fell on the floor into neutral brown carpet). Both were easily replaced from the collection.

For whatever odd reason, the Sabrent drive shows up pre-formatted. The disk layout is MBR and the primary partition is ExFAT. Both of those got in my way as I cloned the original drive to the replacement. First, I had to clean the drive, convert to GPT, then format it as a single NTFS volume. Then, I used Macrium Reflect to clone the contents of the Samsung OEM drive to the Sabrent. Along the way Reflect told me it had turned off BitLocker and that I would need to re-enable it after boot.

Replacing the Samsung with the Sabrent, I went into BIOS and turned secure boot off instead. This let the X1 Nano boot from the cloned drive just fine. I was able to run CrystalDiskMark to compare their performance. Here’s what that looks like:

What do these results show? Indeed, the Sabrent is faster on all measurements, and more so on the most important random 4K reads and writes (lower two rows). It’s not a night-and-day difference, but IMO the added capacity and increased speed justify the expense involved. It’s a good upgrade for the X1 Nano at a far lower price than Lenovo charges. Also, performance is somewhat better than what their OEM stock delivers.

Where Did I Go Wrong?

Cloning was a mistake. I saw it in the disk layout, which showed over 400 GB of unallocated space. Better to have done a bare-metal backup using Reflect with their Rescue Media. Next time I’m in this situation, that’s what I’ll do.

Something untoward also happened when uninstalling the Sabrent drive. When I stuck it back in my M.2 Sabrent caddy (which fortunately handles 2242 as well as other common M.2 form factors), it came up with a fatal hardware error. None of my tools, including diskpart, diskmgmt.msc, MiniTool Partition Wizard, or the Sabrent utilities could restore it to working order. I suspect that removing the battery, even though the power was off on the laptop, spiked the drive with a power surge. It’s currently non-functional, so I hope my warranty covers this and I’ll get a replacement. If not, it will prove a more expensive lesson than I’d planned, but still a valuable one.