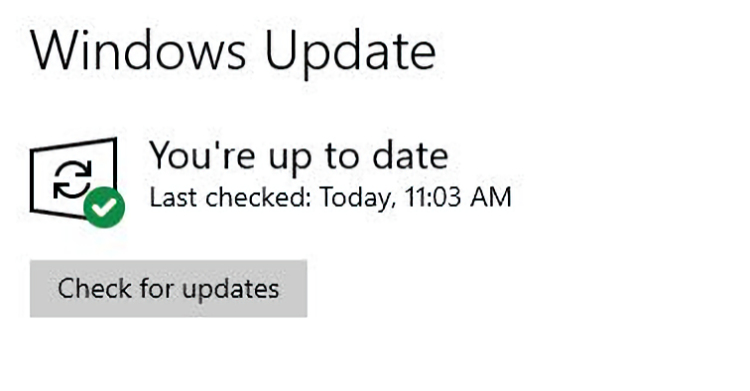 OK, then. Here’s an interesting story. After updating my 2012 vintage Lenovo X220 Tablet to Build 21327.1010 the Windows Update (WU) UI starting misbehaving. I’ve reported it to the Feedback Hub, with a screen recording to show what happens. This experience has me asking myself: might wonky WU presage hardware obsolescence?

Built in 2012 and purchased in 2013 for a book on Windows 8, this system runs a Sandy Bridge CPU. It’s so old, it doesn’t support USB 3.0 natively (though I do have a plug-in Express Card that adds such capability). Simply put, the whole situation has me wondering if this old laptop is finally aging out of usefulness. I retired the companion system — a same vintage, same CPU T420 laptop — late last year because it was flaking out too often for everyday testing. Until this happened, the X220 Tablet remained a paragon of Windows support.

Here’s a short video (24 seconds) that shows very little, but enough for me to describe what’s wonky.

Normally, when you click the “Check for updates” button, the display changes to “Checking for updates” while the activity balls flow from left to right (and repeat until the check is complete). Next, if updates are available, the display reads “Updates available” while it installs them. When it’s done the display changes to “You’re up to date” with a timestamp to match. That final status info serves as the lead-in graphic for this story, in fact.

What Did Wonky WU Do Instead?

As you can see by playing the video, none of those display changes occur. I know the update is working because it grabbed and installed a Defender update when I tried it for the first time and that update shows under “Definition Updates” in Update History. That said, the usual animations (or status changes) that show WU is working are invisible on this PC. All that stuff works fine on my 2018 vintage Lenovo ThinkPad X380 Yoga (which has a Kaby Lake/7th Gen CPU).

Having reported the issue to MS via Feedback Hub, all I can do now is wait to see if it gets fixed. If it becomes a “new normal,” I may need to start retirement planning for my hitherto unflappable and unshakeable X220 Tablet. Sigh. That’s the way things go sometimes, here in Windows-World.

With the upgrade to Dev Channel Build 21332.1000, WU returned to “normal behavior.” But I did have to return to Advanced Sharing Settings/All Networks in the Network and Sharing Center. There, I had to turn off password protected sharing and turn on Public folder sharing. After a reboot,  RDP into the X220 Tablet worked again. This has been an on-again/off-again issue on this laptop for years. (A) it’s easily fixed locally, and (B) it seems to be a low-priority item for MS.

Finalley here’s a shout-out to Eddie Leonard (@DJ+EddieL). He told me the WU item was a known problem and would be fixed with the next build. He was spot-on, and I’m grateful.