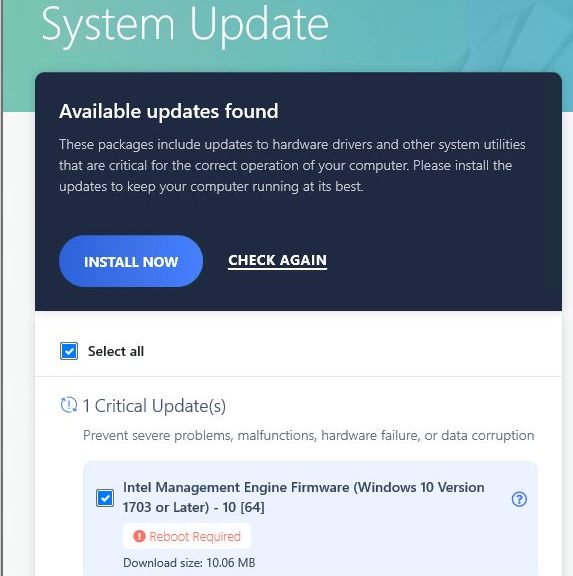 This doesn’t happen with Windows Update, but when you’re applying low-level updates to a system, items that require a reboot must be applied one at a time. I’ve learned this working with Vantage over the past few years. If a firmware update and a BIOS update show up on the same day, it’s best to download and install one by itself. Then, repeat for the second item.

What happens if you try to do more than one? When you attempt to install the second item with a reboot pending, installation fails because it is smart enough to recognize that two separate and distinct reboots are needed.

I don’t always remember this, so I got bitten today when Vantage finished the pre-reboot phase of the BIOS update and transitioned into the IME update. As soon as the IME update got going, it stopped itself and reported an error. Part of the text read “An installation failed to complete properly. Please reboot and try again.”

The Reboot’s the Thing

Of course, as soon as the reboot got through shutdown and into restart, the BIOS update ran to completion and the system rebooted again. After that reboot, I returned to Vantage to generate the lead-in graphic for this story that shows the IME firmware update still pending. As soon as I clicked install, I got an explicit reboot warning, to wit:

If I’d run the sequence IME first, BIOS second, I’d have seen this warning right away, and not been caught in an error. Sigh.

In general, it’s a good idea to make firmware and BIOS changes piecemeal anyway. You don’t want more than one thing at a time to blow up. That could complicate troubleshooting beyond belief. That’s NOT what anyone wants when making deep-level system changes.

Live and learn — or in my case, keep living and get an occasional reminder. Cheers!