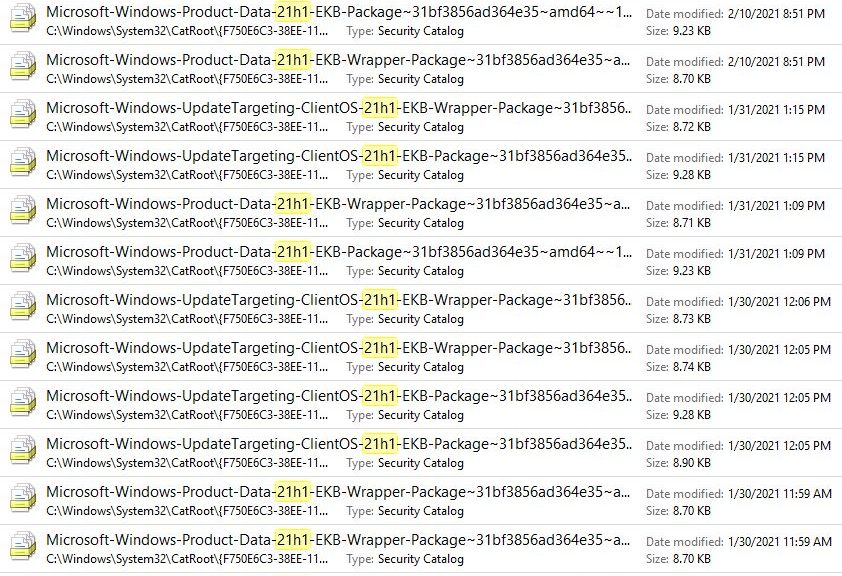 I have to hand it to the team at Bleeping Computer, especially Lawrence Abrams. He’s done a neat and convincing bit of filesystem forensics. It shows that recent Beta Channel updates set the stage for the upcoming 21H1 Windows 10 release. In fact, he shows that key terms EKB 21h1 reveal next Win10 release coming closer to fruition. That inspired the File Explorer screencap for this story’s lead-in graphic.

The string “21H1” (or “21h1” as it mostly appears in filenames) stands for the next upcoming Windows 10 release. EKB, as I learned, is the MS abbreviation for enablement package. This is a pre-staging technique for minor Windows 10 upgrades. It actually relies on updates installed prior to the official enablement of the “next upgrade” (21H1 in this case) that simply get turned on. And indeed, it’s the enablement package (EKB) that does the turning on bit.

All of these terms identify current and upcoming versions of Windows 10, including the current version and build and its status, and the contents and handling of any current or upcoming enablement package (EKB). Most discussion I read about dates for 21H1 still suggest “May or June” as the GA date for this upcoming and minor Windows 10 feature upgrade. I see no reason to disagree with those assessments. And indeed Microsoft’s own 21H1 announcement post  doesn’t say much more than only minor changes to Windows 10 will show up when the release goes public.

We’ll just have to wait and see when 21H1 gets the nod from the Insider Team, and makes a public debut through Windows Update. Whenever that happens, though, it’s pretty clear that 21H2 is when the big changes for this year will hit Windows 10. Stay tuned!