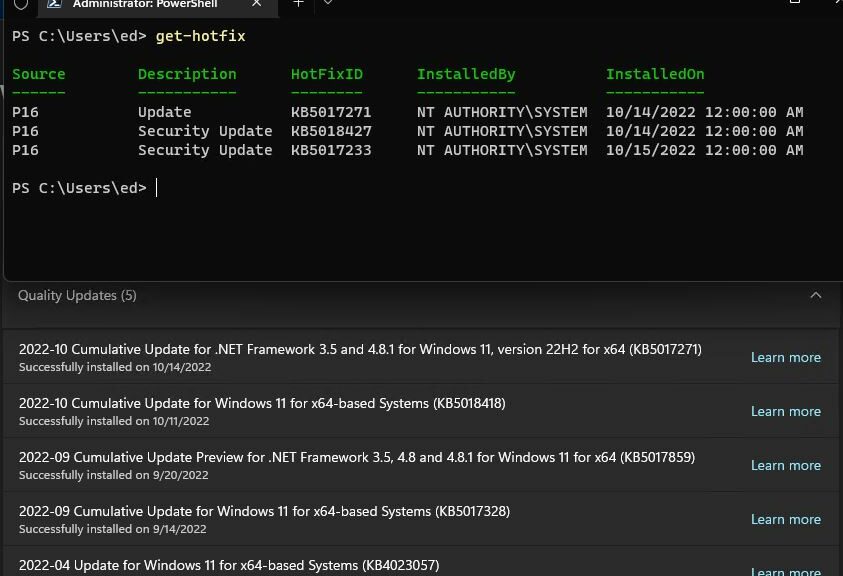 When MS lifted the safeguard hold on  my Lenovo P16 Mobile Workstation, I upgraded it to Windows 11 22H2. Naturally, my first thought thereafter was to check on status of recent updates and fixes. That’s when I figured out that KB5018427 was included in the 22H2 version installed. Seems that Get-Hotfix shows what WU sometimes cannot — at least as far as Update History goes.

It’s all apparent in the lead-in graphic for this story. In case it’s not legible enough, right-click on that image and select “Open image in new tab” (Chrome, Firefox, Edge, etc.). That should show it at original resolution. If necessary, you can use the browser’s Zoom controls to magnify the text.

Update history shows only user-alllied updates. It does not show updates that — like KB5018427–get rolled up into the windows image file (WIM) used to install a version upgrade. That’s what makes the PowerShell Get-Hotfix command so useful. Its image analysis tool tells it what’s there, whether the user applied it directly, or whether it’s already “in there” as is the case here.

What Led Me Down This Trail?

I read the Windows Latest story about KB5018427. Naturally, I wanted to check on its status in the upgraded 22H2 version. When I didn’t see it in Update History, I visited the Microsoft Catalog and downloaded the 64-bit MSU file. Upon attempting its installation, it searched the updates already installed on the PC. That produced the following status message: That made me understand the KB had been included in the WIM file I’d already installed. A search on “use PowerShell to show updates installed” led me to the Get-Hotfix command.

As the afore-cited PowerShell docs states:

The Get-Hotfix cmdlet gets hotfixes, or updates, that are installed on the local computer or specified remote computers. The updates can be installed by Windows Update, Microsoft Update, Windows Server Update Services, or manually installed.

Thus Get-Hotfix can catch patches and fixes no matter how they get included in the image it checks and reports upon. The rest, as they say (drum roll, please)… is history!