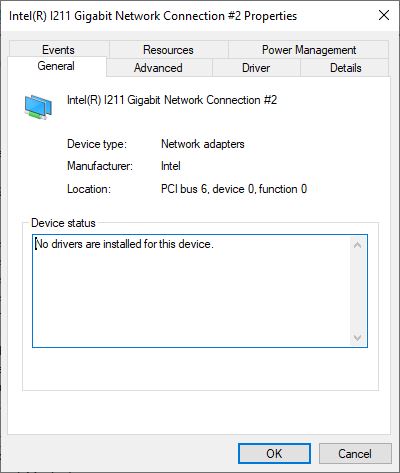 I had an interesting if unwanted surprise waiting for me when I returned to my production PC after taking a break this morning. Instead of my usual Internet connection, I had zilch. Domain names weren’t resolving. Running IPCONFIG I saw an APIPA address (starts with 169.x.x.x). I knew this meant my NIC had lost its connection with the primary network router, from whence DNS, DHCP and Internet access come. Upon checking the driver in Device Manager, I saw these dreaded words “No drivers are installed for this device” (see above). Indeed when a GbE adapter driver goes MIA, there isn’t much you can do with that device until the driver gets fixed.

If GbE Adapter Driver Goes MIA, Then What?

Fortunately my Asrock Extreme 7+ has two GbE adapters: an Intel I211 and an Intel I219-V. It was the I219-V that dropped off the network. But when I plugged in the I211, it immediately resumed operation. My suspicion: driver corruption in the I219-V driver. So I visited the Intel download site and grabbed a copy of the 26_2.zip Intel Ethernet Adapter Complete Driver Pack.

But then, things got interesting. The same thing that happened with the I219-V started up with the I211. It wasn’t until I reinstalled a new driver from the Intel pack linked above that the I219-V returned to normal operation. I ran DISM /checkhealth with nothing found, but SFC /scannow did report making some repairs. Something odd has definitely hit my production networking facilities.

Bracing for the Inevitable…

I’ve been pondering a new desktop PC build for some time now. This rig is built around an Asrock Extreme7+ and an i7-6700 Skylake processor . Both made their debut in Autumn 2015 (the chip in September, the board in November). As I recall I built this system in the Spring of 2016. That’s now more than 5 years ago. I’m inclined to think this may be fate’s way of telling me it’s time to replace my desktop. Time to revisit and revise my build plans, and get on the stick.

Note Added May 7 (One Day Later)

Today, the whole network here at Chez Tittel blew up. Weird wireless and wired LAN behavior convinced me the Spectrum-supplied WAP/Router/switch device was losing … something. A quick trip to the Spectrum store and a device swap set things right. Read all about it here: More Network Trouble Manifests.