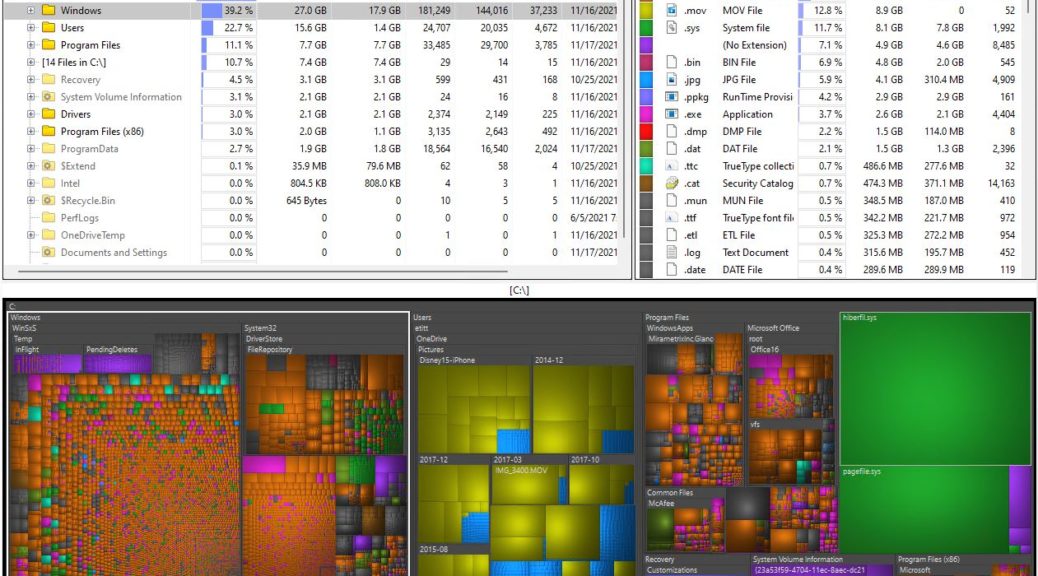 I’ve got a new toy to play with here at Chez Tittel — a Yoga 7 14ITL5. My First Look at this unit appeared a couple of days ago, and includes detailed specs and other initial impressions. Since then, I’ve been exploring Lenovo Yoga7i loaner as my schedule has allowed and have uncovered some surprising and interesting information and capabilities. Let me tell you more…

I speculated that Windows 11 was applied as an upgrade as part of the “first boot” behavior on this laptop. I was wrong about that. The update history shows no upgrade, and there’s no Windows.old folder on the machine. You can see its disk map, courtesy of WizTree, in the lead-in graphic for the story. It grabbed all of my OneDrive stuff when it established my MSA user account, but it’s all Windows 11, all the way.

Obviously, interesting things are possible by way of Windows 11 OEM deployment. The OOB/first boot experience is different from anything I’ve seen in previous versions of Windows, from 10 back as far as you’d like to go. It looks like everything hinges on the Microsoft Account (MSA) that users supply for the initial login, which seems to conclude with a complete OS install and setup.

The disk footprint is reasonably modest. Discounting OneDrive, there’s about 55 GB worth of files on the Yoga 7’s C: drive. I just ran Disk Cleanup (admin) and was able to bring that down by 2.02 GB. Running DriverStore Explorer found about 32 MB worth of obsolete (probably duplicate) device drivers, too.

But it’s a completely native Windows 11 installation. Examining Apps & Features in settings, I see some stuff I neither want nor need, including Alexa, Disney+, McAfee LiveSafe, and Spotify. But as crapware goes, that’s a pretty light load. Kudos to Lenovo for not loading their image down with all kinds of useless cruft.

My verdict on this US$850-950 PC as configured: pretty good value for the price. I wouldn’t use this PC as a daily driver, but it is a nice casual computing platform. It runs reasonably well, and looks and behaves nicely, too. Good stuff!