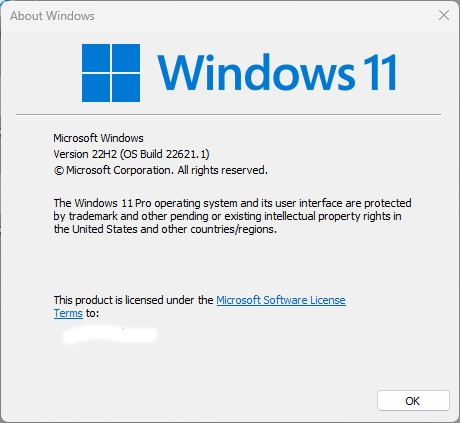 With some consistency and frequency, most of my go-to Windows news sources report the same thing. That is: the latest Beta Channel Build 2221, is likely to go out to OEMs as the “Release to Manufacturing” (RTM) version for Windows 11. This raises the question “Could Build 22621 be RTM version?” I’m inclined to believe it might be, so please let me explain why. . .

Timing: MS has promised a 22H2 Windows 11 release, which means sometime between July 1 and December 31, 2022. Given that the usual delay from RTM to public release varies from as little as 12 to as long as 20 weeks over the life of Windows 10, a similar range seems likely for 11 as well. Given 22621 came out on May 11, that would put general availability between July 27 and September 21. This makes good sense to me. OEMs need time to get their collective acts together, and to get ready to deploy new images for the next feature update on their (mostly) consumer grade equipment.

Insider Channel Divergence: As I reported here on May 12, 22621 represents the divergence of Beta and Dev Channel Insider versions. MS forked the Insider channels so it could concentrate on the next Feature update in the Beta Channel, while working on future features for a presumptive 23H2 release in the Dev Channel. Stands to reason they’d have forked when they were getting close enough to recognize a possible RTM in the Beta Channel.

22621 Announcement blog post: Combine the opening statement of “small set of fixes” with “preview experiences that are closer to what we will ship to our general customers” and you get something pretty much like a “closing in on RTM” impression from this post.

Winver Label: look it says right in the lead-in graphic “Version 22H2.” What more do you want by way of (potential) proof?

It’s Not a Sure Thing, But…

Indeed, MS will make changes to 22621 as and when user telemetry indicates a need for same. That goes double if bug reports start proliferating. But, absent such spurs to additional action and related changes, 22621 seems pretty close to what is probably already going into OEM intake processes. Stay tuned: I’ll keep you posted as things develop from here!