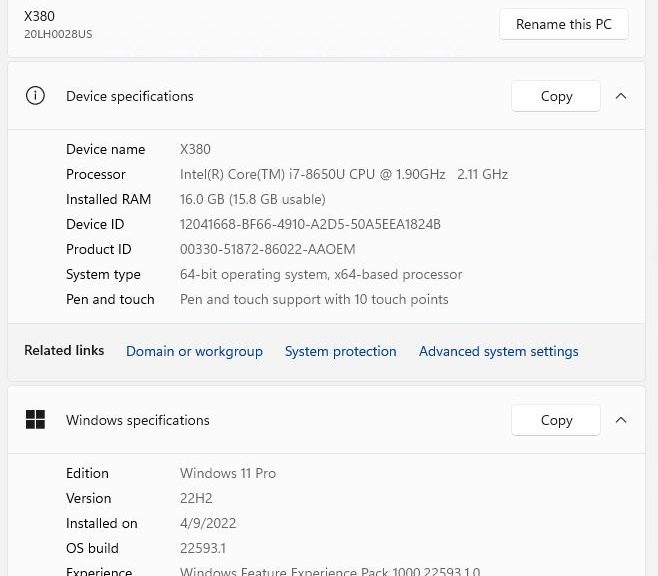 For the past couple of Dev Channel builds, I’ve been trying — and failing — to get my Beta Channel test PC promoted to the Dev Channel. For Builds 22593 and 22581 the tap had been opened to upgrade from Beta to Dev Channel. But on my Lenovo ThinkPad X380 Yoga (8th Gen i7, 16 GB RAM and 1 TB SSD) it didn’t work. After many hours of dithering about, a clean install succeeds where Beta promotion fails. Let me explain…

Wiping the primary system/boot drive was apparently the ticket to success. Given that I seemed to have mystery driver issues, starting over with a clean slate has finally set things right. And indeed, it was a rough and time-consuming ride along the way. Ultimately it took less than 35 minutes to perform the clean install itself. Alas, though, it always takes longer to put all the apps and settings back the way I want them from a clean slate. That’s life!

This is my first clean Windows 11 install since the new OS showed up in mid-2021. I had to be reminded that the BitLocker ID associated with the key needed to enable a USB-based install comes from the device. I spent a while trying to provide the wrong key, because I didn’t start by matching the Key ID value to the Device Name. Only then did I find and enter the right recovery key. Sigh.

I also learned that Norton’s external drive scan function takes FOREVER to complete. I let it run for 1:15 out of curiosity, but that was already too long for me to wait to move onto my next step. So I cancelled the scan (which took no time at all, thank goodness) and went onto the clean install.

Performing the clean install was remarkably quick. It included the option of defining a machine name near the tail end, too (something new to me). That was an opportunity I grabbed gratefully, and saved myself a bit of time moving ahead into post-install efforts.

Bottom line: I’m incredibly grateful to have this machine back where it needs to be. It’s nice not to have the mystery 0XC1900101 error hanging over my PC (and my head) any longer. I’d love to know what caused it, and how to fix it, but I never got enough data to make that happen. That said, it’s nice to know the “repair of last resort” — namely a clean install — still does the trick when other techniques come up short.