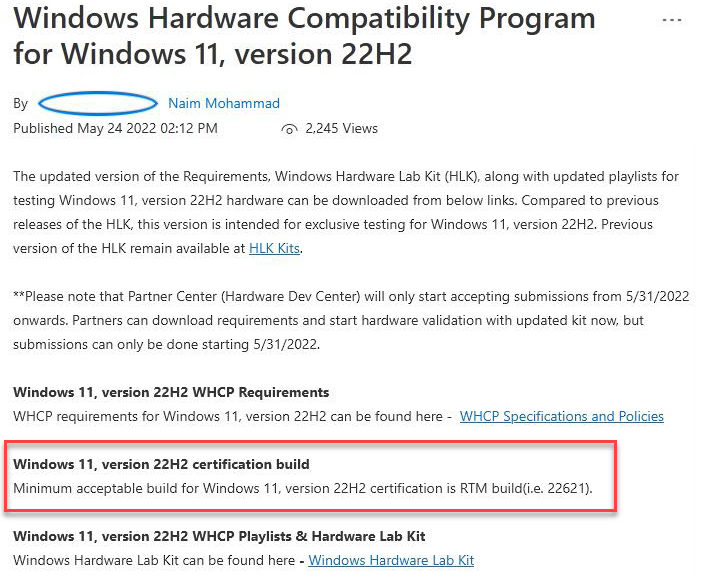 OK, then: I was pretty much on the money yesterday when I speculated about Windows 11 22H2. A May 24 Windows Hardware Compatibility blog post — shown as the lead-in graphic above — totally confirms this. Indeed, Build 22621 takes RTM role for OEMs in the run-up to its release later this year.

Here’s a quote from my May 24 piece Windows 11 21H2 Hits Broad Deployment:

As I’ve already reported on May 16, Beta Channel Build 22621 is very likely to RTM as 22H2 in a short while. That makes 22H2 GA likely in September or October.

The lead-in graphic (see red boxed text) confirms that Build 22621 is the “Windows 11, version 22H2 certfication build.” That makes it the starting point for the images that OEMs will build to load onto machines sold after the 22H2 GA date whenever that might be.

And, as for that date, later on in the afore-cited Windows HCL blog post it says:

To me that puts GA date sometime after September 5, and seems to confirm my speculation that this would occur in September or October of this year. Unless something unforeseen occurs — and it could — September 6 is suddenly looking possible. Stay tuned, though: as usual, I’ll keep tracking this and let you know what I learn.