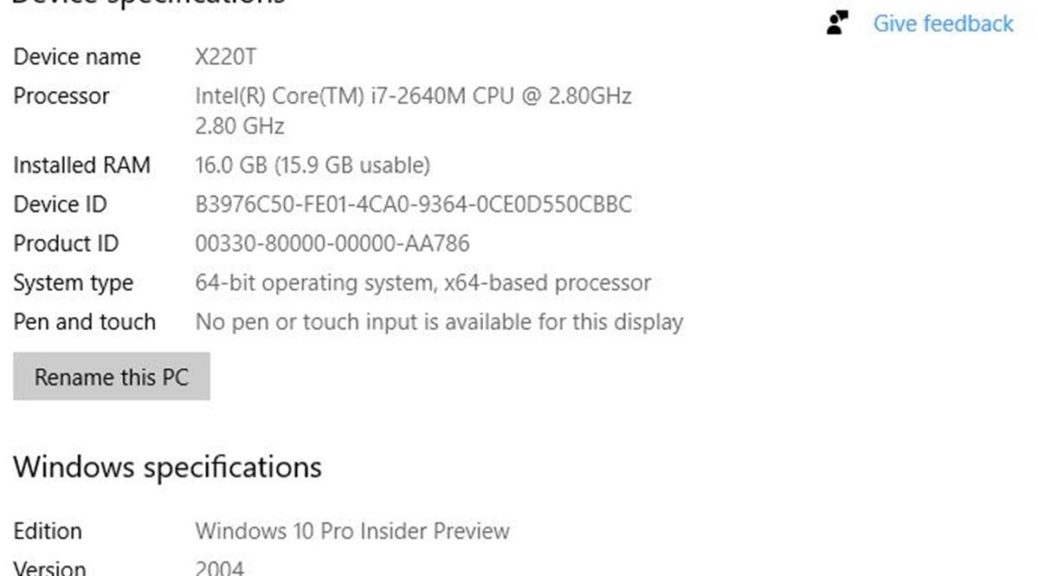 In the wake of the latest Fast Ring Insider Preview release — namely 19592.1001 — I noticed the return of some interesting language. If you click Settings → System → About, you can see it for yourself. In fact, it shows up under the “Windows Specifications” heading. (See the lead-in graphic.) Notice the bottom line is labeled “Experience.” And sure enough, that’s exactly where Windows 10 Feature Experience Pack returns, with a release numbered 120.7001.0.0. There’s no such line in the About info for the current 1909 release (nor for earlier 180x and 190x releases, either).

I did some fairly serious digging before I found this nomenclature. It lives in the Microsoft Hardware Dev Center. It’s covered in the “Available Features on Demand,” aka FOD, document. If you browse through the “Preinstalled FODs” items list, you’ll eventually discover this item. That’s because the list is long-ish and alphabetized. Thus, Windows Feature Experience Pack appears near its end. Here’s that entry’s text, verbatim:

This Feature on Demand package includes features critical to Windows functionality. Do not remove this package.

As far as I can tell, this is mandatory in every Windows image. Thus, I’m not sure why MS has decided to call this out with its own line in the About/Windows Specifications info. But there it is, in black and white. Perhaps Microsoft will tell us more about this when another Feature Update is released. Notice the release info is version 2004 (aka 20H1). Maybe when the next Feature Update becomes generally available, we’ll learn more. In the meantime, it’s something new and relatively mysterious. Just the kind of thing that keeps life interesting, here in Windows World.