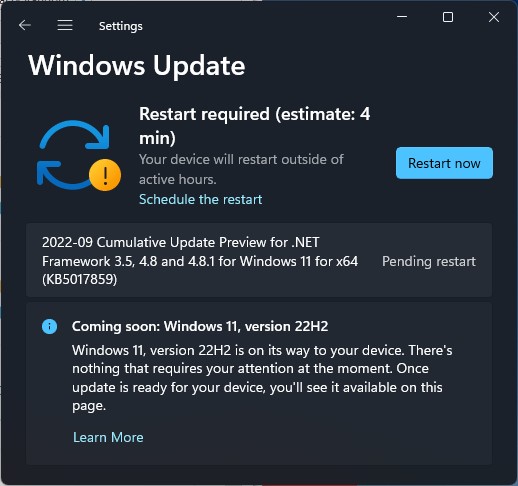 When the news hit yesterday that the gradual rollout for Windows 11 22H2 was underway, I had a feeling… I’m someone who’s perpetually or chronically excluded from the first round of many new Windows releases or features. And so it was for my brand spanking new Lenovo P16 Gen1 Mobile Workstation. Because a P16 Safeguard Hold blocks Windows11 22H2, it gets the “coming soon” message shown in the lead-in graphic. Sigh: here I go again.

Wait for MS to lift the hold, and check the other machines. My two- week-old Lenovo P360 Ultra didn’t even get the “coming soon” message. Those are both 12th Gen i9 CPU based machines. Right now, I’m checking my Lenovo Yoga 7i (11th Gen i7) and X1 Carbon (8th Gen i7) PCs. So far, neither has gotten the offer either. That still leaves the Ryzen 5800X build upstairs to check, but I think I know what I’ll find…

That said, the MS Download Windows 11 page is already offering ISOs for 22H2. I can force the upgrade if WU isn’t offering and it’s not on Safeguard Hold status. That describes 4 of my 5 PCs running Windows 11 21H2 right now. I’ll have to think about what I want to do with them, item-by-item.

For those who want to push the boundaries, MS also makes 22H2 ISOs available for download. [Click image for full-sized view.]

What’s Next, at Chez Tittel?

Right now, I’m standing pat. I’ve got a couple of other projects underway. I want to make progress on those, and then I’ll start thinking about which PCs to advance to 22H2, and which to leave alone. Given that the P16 is on Safeguard Hold, I’ll wait on that one. But as a straight-up test machine, I’ll probably push the P360 Ultra forward first. The others will vary (I use the X1 Carbon as a road PC, so I’m not inclined to push that one forward ahead of its time).

Stay tuned! I’ll keep you posted as things develop. It’s all fun, all the time, here in Windows World.

I just force-upgraded the Lenovo Yoga 7i to 22H2 (11th gen i5-1135G7, 12GB RAM, 500 GB Samsung OEM NVMe SSD). Despite downloading via Wi-Fi, the whole process using the Windows 11 Update Assistant took under 18 minutes to complete. I see no errors in DevMgr either. So far, so good…

I have now also force-upgraded the P360 Ultra and the Ryzen 5800X builds. Because the Nvidia driver was auto-updated during the upgrade (and I already know that’s a non-starter) I had to switch over to the built-in Intel UHD 770. I’ll have to roll back the Nvidia driver again to get the discrete GPU working. Again, I used the Upgrade Assistant.

For the 5800X I downloaded an ISO file, mounted it, then ran setup.exe from the root of that virtual drive. Took a bit longer to download, but was also a pretty quick install. So that’s 3 PCs upgraded today without too much drama or drivel.