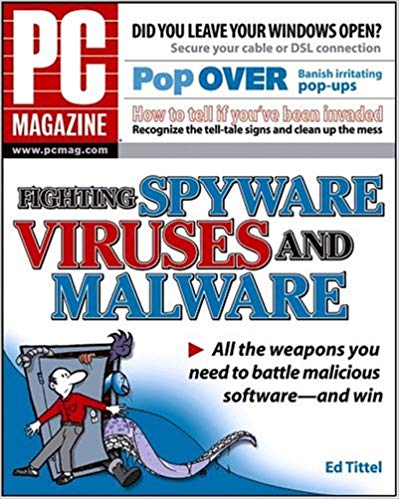 Today’s blog post title is more literal than readers may infer. I woke up last night at 12:51 dreaming that my production desktop had been infested. It must’ve been a historical drama of sorts. That’s because it featured a screen takeover scenario. I still remember when you could “catch” viruses and spyware of an interesting sort. They would cause a web browser to spawn an infinitude of Windows. Thus, as I was coming awake, it was from sitting at my keyboard trying to launch an admin command prompt window. It would let me start killing processes and bring the takeover of my desktop to a screeching halt. As Halloween is five days away as I write this, it seems seasonally appropriate in a ghoulish way. In 2005, when I wrote this book, malware didn’t carry the same risks of financial loss, identity theft, and denial of services that it does today.

Back in 2005, I wrote a book for Wiley in its PC Magazine series. It was entitled Fighting Spyware, Viruses and Malware. This title was no best-seller, but it did OK. For me, it was a great excuse to get paid to learn something I needed and wanted to know. In those days, protecting oneself against malware was more straightforward than it is today. The digital world of “cops and robbers” — bad guys trying to foist attacks and steal info of value, good guys doing their best to stymie them — is now more seriously weaponized than in earlier times.

I have a “most important weapon” against malware these days. This is aside from the usual panoply of anti-malware, threat protection, and safe computing practices. I’m talking daily image backups. There’s nothing safer than blowing away the entire preceding and infected or suspect installation, replacing it with a bare metal rebuild. That may not always work against the most insidious of UEFI/BIOS malware or rootkits But it puts paid to everything else. It’s also much faster to restore an image than to clean up after an attack. I’m not inclined to keep a suspect (or infected) image around, either. Macrium Reflect is my weapong of choice. It restores my oldest and slowest PC (a 2013 i5 mobile CPU tablet) in between 15 and 20 minutes. I’ve never been able to get through detection, cleanup and subsequent screening and inspection in under a couple of hours.

“Be careful out there” is as relevant for those who travel the highways and byways of the Internet as it is for the real world. Make sure you’ve got your antimalware act together. Keep a current working backup ready should you need it. Remember also that it’s easier to avoid trouble than to work your way out of it. And for those who observe the holiday, Happy Halloween!