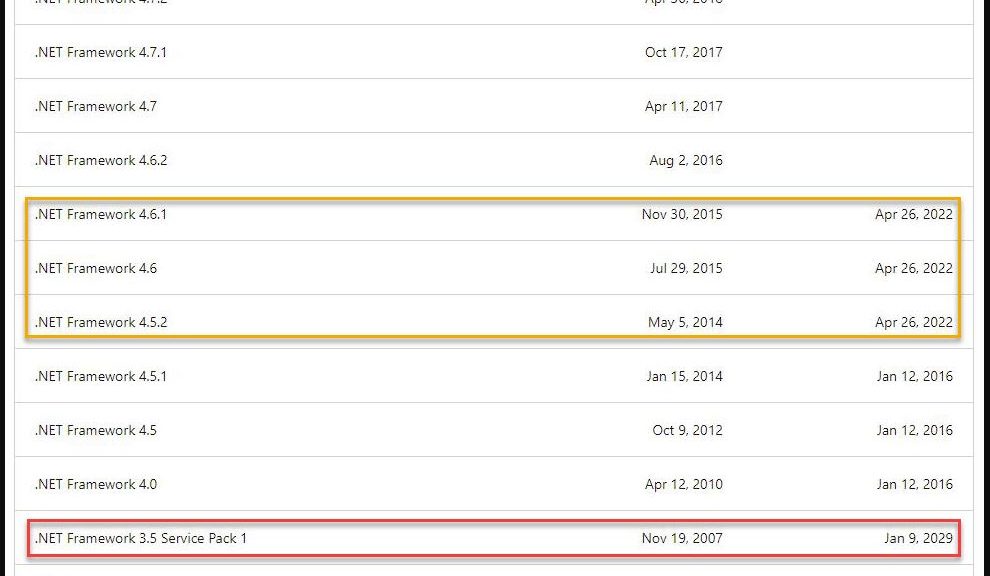 Last Friday, I posted about impending End of Service (EoS) dates for some particular .NET releases. As shown in the lead-in graphic, .NET Framework version 4.6.1, 4.6 and 4.5.2 are all slated to go EoS on April 26 (13 days in the offing, as I write this item). That said, .NET 3.5 falls outside pending EoS (the SP1 version, anyway) as shown in red in that same graphic.

It turns out there’s a LOT of software that still leans heavily on .NET version 3.5 SP1. Because older software — some dating back to Vista and Windows 7 eras — requires this .NET version to run, MS packaged this particular .NET version as a standalone product with its own release and support schedule. Again, a look at the lead-in graphic shows that version 3.5 SP1 doesn’t hit EoS until January 9, 2029, nearly 7 years later than any other known EoS dates.

From older versions of Visual Studio, to a wide range of older, but still-used applications, .NET 3.5 is apparently far from moribund. To me, the VS connection is particularly telling, because it speaks to custom apps — many built in-house at companies and organizations to meet specific or proprietary needs — that benefit from an extended lease on life.

Where’s Your Favorite .NET Version in This Mix?

If you look at the Microsoft Docs Lifecycle page for the Microsoft .NET Framework, you’ll find the source for the graphic at the head of this story. MS updates this info from time to time, adding new versions and obsoleting older ones. I’m a little bemused to see that my Update History makes reference to a “2022-04 .NET 6.0.4 Update for x64 Client” (KB5013437). Though I can find an MS Catalog entry for this update and a set of .NET Release Notes that mention versions 6 and 7, only this document provides EoS dates for 7 (November 2023) and 6 (November 2024). Makes me wonder why all this info isn’t also consolidated on the Lifecycle page. Go figure!

Bottom line: I was wrong in my Friday posting in presuming version 3.5 SP1 was also slated for EoS along with the other 4.x versions named above. As you can plainly see in the graphic, 3.5 is around for some while yet. Live and learn!