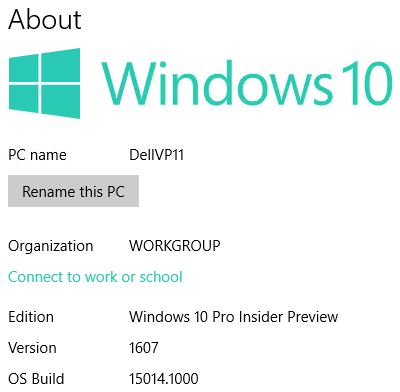 As I was finishing up my day in the office yesterday I made a last pass through TenForums.com. I noticed there that Insider Preview Build 15014 was out. But, alas, I failed to read the covering blog post. Had I done so, I could’ve saved myself some wasted time and effort. Turn out that the progress bar for downloading the latest Upgrade is broken. So when I started updating and didn’t see any progress on my desktop test machine, I immediately presumed “Another issue with WU.” This led to evasive action that ultimately forced me to restore a backup and then reapply the upgrade (successfully) later on. And that’s how I found myself able to observe that impatience imperils progress on 15014 upgrade maneuvers, as noted in this blog post’s title.

You could understand this self-inflicted problem as an “RTFM error,” if you like. But it actually helped me in a couple of interesting and unexpected ways. For one thing, I found myself dealing with the dreaded “black screen of death” on Windows 10. It’s something I’ve read about a lot, but haven’t troubleshot too often. First, I tried to see if the OS was available enough in the background without a working display to launch Task Manager. That meant entering Ctrl-Alt-Esc at the keyboard, then striking Alt-F to open the File Menu. An “R” launches the Run box, which one can use for a variety of tasks. I tried re-launching Windows Explorer, then a shutdown command. Nothing doing. My machine was pretty hosed, it seemed. Eventually I did reach my ultimate goal: getting 15014 installed.

Getting Past the Won’t Boot Hurdle

Next, I turned to my old reliable backup program, Macrium Reflect Free. It thoughtfully installs its console as a boot option on the Windows OS boot screen, so I happily fired it off. Inside the Macrium-based Recovery Environment it provides, I found my way to an image of the wonky disk I’d made on January 13. It took just a few mouse clicks to get the restore operation going, and about 10 minutes to complete the job. After that, the machine booted immediately so I could start all over again.

This time, armed with the right information, I let Windows Update chug away to do its thing. This process took around 25 minutes to complete, but the upgrade was entirely successful. Here’s what I learned from this experience:

I did fine on the second two items in the list (I’d learned them the hard way a long time ago). But I’ll have to do better on the first two going forward so I don’t get caught unaware. That’s modern life in Insider Preview land! I don’t want to have to rewrite “Impatience Imperils Progress on 15014 Upgrade” for some other build number, too.