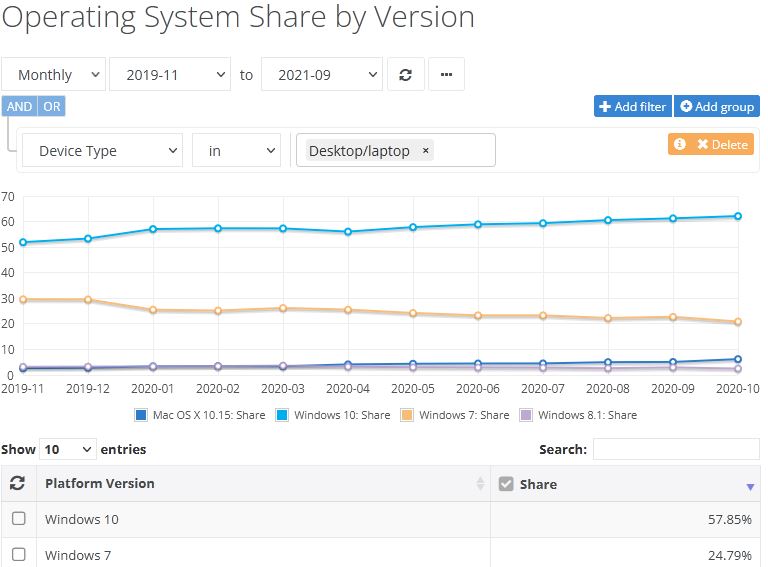 The mind reels. I just checked the Operating system market share by version stats at NetMarketShare.com. To my outright astonishment, 20.93% of PCs worldwide still run Windows 7. By contrast, Windows 10 has a 62.16% share and MacOS 6.21% (the numbers in the figure only run through September; these are for October). Thus, I have to ask: “Why Is Windows 7 Still Running on 1 of 5 PCs Worldwide?”

Answering Why Is Windows 7 Still Running on 1 of 5 PCs Worldwide?

In a piece from Microsoft Story Labs with a 2018 copyright date, the company claims “there are more than 1.3B devices running Windows 10.” If that represents 62.16% of the number of PCs running globally, that means that 437 million PCs could be running Windows 7.  (I know: I’m making assumptions willy-nilly, but this is a strawperson argument anyway.) That said, both The Verge and ZDNet reported in January 2021 that there could be somewhere over 100 million (Verge) and under 200 million (ZDNet) Windows 7 PCs still in use. Whatever that real number may be, my question is: “Why?”

Windows 7 hit EOL in January 2020. Microsoft does offer annual Extended Security Updates (ESU) for such machines, but that costs US$62 per license as of January 2021. Nobody knows for sure how many PCs are under ESU coverage (MS doesn’t disclose those numbers). But I’d be surprised if more than 20 million PCs were under contract.

What does that mean for the other 80 to 180 million Windows 7 PCs still in use? Big security exposure, and the onus for support on their owners. To me, this falls under the heading of “unacceptable risk.”

Again: Why Keep on with Windows 7?

Surely, the biggest answers have to be:

I understand these reasons, but I don’t understand that users and companies/organizations are willing to take big security risks as a consequence. I am flabbergasted that the curve showing in the lead-in graphic is declining so slowly. 5% in 10 months translates into 6% annually. That means that assuming the rate of decline remains constant, Windows 7 will remain in use for another 3 years and then some. All I can say is: Mind completely blown!

What could — and probably will — change this leisurely decline is some major security exploit that’s sure to come along. When owners must face clear, immediate and present danger of financial loss or legal liability they’ll get on the stick and start migrating faster. In the meantime, inertia continues to rule. Amazing!