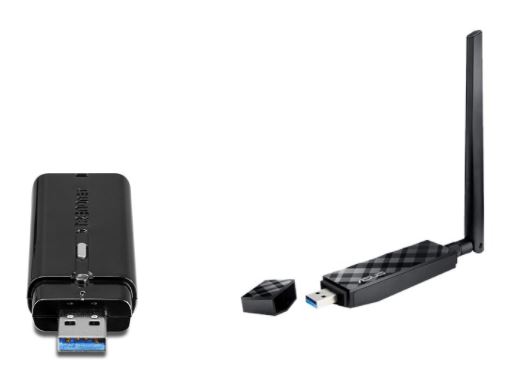 A couple of days ago, my son mentioned that Internet speeds on his PC weren’t terribly impressive. So we went up to his room, and visited the Microsoft Store in Win10. While there we installed the handy “Speedtest by Ookla.” And indeed, the initial results weren’t impressive. 33.5 Mbps download speed, and 14.1 Mbps upload speed. Right now, my wired desktop churns out 335.5 download, and 20.93 upload, so I could feel his pain. It also led me to speculate that a new WiFi adapter might improve the situation. In fact, that’s why I entitled this post “Time Boosts (New) Wireless Hardware Throughput.”

Let me explain how his desktop connects to the Internet. On the PC end, he’d been using an Asus USB-AC56 adapter. I’d purchased this about four years ago (April 24, 2014) for around $70 or so. On the router side, his PC was one of two devices accessing the Spectrum boundary device, an Arris TG1672G router. According to the specs, this device supports dual band 802.11n WiFi access. In turn, that means the best one could hope for from that device is something on the order of 450 Mbps. This translates in practical terms to perhaps 150-200 Mbps in real-world situations. Because I couldn’t change the boundary device I decided to try a newer USB WiFi device on his PC to see if it would make a difference. (He’s too far away from my aging ASUS 802.11ac AC-68U router to beat the Arris connection.) Newer IS Better — This Time, at Least…

It did. I had to go to our local Fry’s to pick up a new drive dock for my office anyway. While there, we dropped $25 on a Trendnet TEW-805UB AC1200 Dual Band Wireless USB adapter. Unlike the Asus unit it didn’t have an external antenna. But the Arris cable modem is no more than 20 feet away from my son’s PC. So, I didn’t think that would make a big difference. (The units with external antennae cost more than double what we paid for this device.) No sooner did we try it , than we experienced a dramatic speed boost. (We did have to install the drivers manually. Win10 didn’t recognize the device on its own. With the Internet disabled because we’d unplugged the Asus device, it couldn’t grab drivers online.)

What were those results? Download speeds went from 33.5 Mbps to 70.5 Mbps, and upload speeds went from 14.1 to 14.5 Mbps (upload speeds are throttled anyway, as the results from my wired GbE connection in the first paragraph clearly attest). Thus, for a relatively modest $25 outlay and very little effort, we were able to double his Internet download performance. It probably isn’t the best $25 I ever spent, but it is far from the worst such expenditure as well.

That would be the title for this blog post, wouldn’t it? Simply by replacing an older, slower wireless adapter with a newer, faster one, all other things remaining unchanged we nevertheless more than doubled download speeds. The relentless march of technology can work in your favor, if you put it to effective use. As I’ve already said, I’m convinced that makes the money well spent for the USB WiFi device upgrade.

One Answer Down, More Questions Ahead

This also raises some questions I wouldn’t mind experimenting to determine some real-world answers to — namely:
1. If I used a more expensive USB WiFi adapter with an external antenna, would it be cost-effective in terms of speed increase vs. additional expense?
2. Does this mean I should replace my current ASUS 802.11ac AC-68U office router (I’m using it only as a WAP for the WiFi devices in my office, and the iDevices around the house) with something faster and newer? I can buy an ASUS AC RT-68U for about $136 (Newegg). It’s an AC1900 device, which is about 50% faster than my current box. For $40 more, I can get an AC2400 unit (100% faster); $135 more gets me to AC3100 (258% faster); and $165 more to AC5300 (442% faster). I need to ponder those cost benefits to determine if the outlay justifies the increased access.
3. Finally, does this mean I should buy some more of those $25 Trendnet WiFi dongles to see if they boost throughput on my older WiFi-attached PCs (laptops and tablets, mostly) to justify the expense? Because I can borrow my son’s already-present device and try it out on those other machines while he’s off at school, I can figure this out without having to spend any more money. As an inveterate cheapskate, that’s why I’ll try this out first.

If I learn anything interesting or informative, I’ll post follow-up data here. I’m also going to mount a “review request” campaign to various WiFi hardware makers and see if I can secure loaner/review units to conduct those other experiments. Stay tuned! This is already pretty interesting, but could easily get better still.